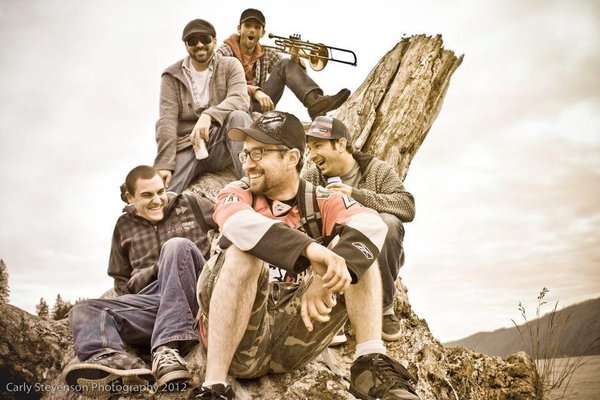 Ska Fest: First off, who is in this band and why do you play music?

Sweetleaf: Let's start with Zack Knippel on bass. Jay Ramalho plays sax. We've got Scott Renton on the trombone. Chris Jones doing vocals and guitar. We also just added two new members, Ethan Horan on drums from Step Back Dave and Greg Elliott on trumpet. What made us want to start a band? Man, we're musicians, we want to play for people and for them to have a good time, and for us to have a good time.

Ska Fest: So you are a fairly new band, but you have found a place within the local scene. I was going to ask what you feel about Victoria's ska scene and how you fit into it.

Sweetleaf: Man, what do we think of it? We love it! I think Victoria has got a great group of people that go out to shows and genuinely love live music over the DJ crap that's out there. I mean, not to say that it's all crap, but there is an overwhelming amount of manufactured music. I think people in Victoria want to hear stuff made by their friends. Good times, right?

Ska Fest: I would also say in terms of your sound, you've got a bit of a funk influence with the ska. Where do you find your voice?

Sweetleaf: It all starts with a riff or a chord progression. Then we do words, and horn lines, and all that stuff follows. A lot of it starts with a bass line too. Chris writes about 95 per cent of lyrics, but we all share and help out with the music.

Ska Fest: So you guys played a recent show with Tuff Jelly and Jake Mcfadden at Falicitas. How did that one go for you?

Sweetleaf: Yeah, it was great for the new guys. We met up and we only had a few weeks to put it all together, but we all did a great job of that. We played with Tuff Jelly who were awesome. They're a fun band to dance to and they've got a lot of good tunes. I really like their cover of Bob Marley's "Mr. Chatterbox." Jake did a good little acoustic show. He has a nice voice and played some great songs, sort of in a Jack Johnson sort of way, but with his own spin.

Ska Fest: It also looks like you've got a few shows coming up. One with The Hillside Hooligans and Tuff Jelly on October 26th and one on November 9th with Bananafish Dance Orchestra and Kikeyambay. Are you guys stoked for those?

Sweetleaf: Oh yeah, totally. We have some new songs coming down the pipe soon, so hopefully they'll be ready by then. We actually preformed one of our new songs, "You've Been Duped," last night and it went over really well.

Ska Fest: Anything else coming down the pipe readers should know about?

Sweetleaf: We are recording right now at the Hidden Gem. It is sort a slow process because, well, training up the new members and what not. Our previous drummer, Gaelan, we recorded 8 songs with him, so I think we'll throw one or two more on their with the new guy. We should get back at it this month. We've also got a cool acoustic show happening at The Reef on October 25th. People should come and check that one out. We're more focusing on recording right now so we can push it out there.