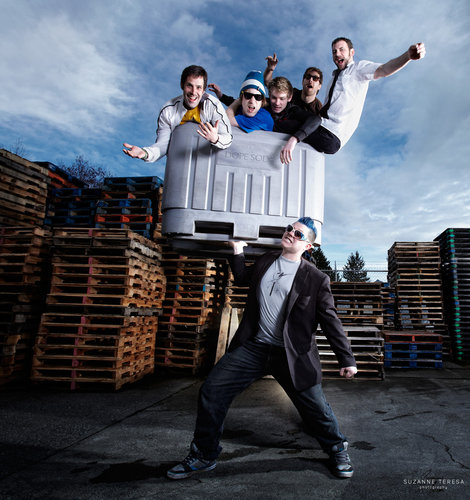 Interview with Dope Soda was done in June, 2012 by D'Arcy Briggs

Ska Fest: When and where do you guys meet? When did you decide to form the band?

Dope Soda: Well Dope Soda was a project I have been wanting to do for a very long time. As I've always just been "That blue haird trombone player" or the never ending "KiltlifterDave" that jumps up with random bands, it was time to front my own thing. With the Kiltlifters dropping into a coma, it was obvious Matt Carter needed to stay rockin' out on vocals and on the stage. He said he always wanted to have a band called Dope Soda. At this time I was working on a second Malcolm Reynolds Project with Greg Szabo. so all I needed was to grab a few more players and get to it. Half the songs were already written and the other half was well on its way. Booked an opening slot with Hey Ocean in Nanaimo Nov, 2011 and Dope Soda was born.

Ska Fest: What drives you as a band?
Dope Soda: The main driving force of the band on stage has to be Matt Carter on the keys. And off stage has to be our want and need to push this band further than anything any of us have been apart of. Keeping everyone happy and making sure we are having a great time.

Ska Fest: How would you describe your sound and lyrical content?

Dope Soda: The sound has to be best described as a coctail of Ska, Rock, Jazz, Punk, Reggae, and Hip Hop. Blended and served on a hot day to keep your ears refreshed.

Ska Fest: What's the next step? Any plans for the future?

Dope Soda: There is always a next step. one foot after another. We want to make an impact all over BC within our first year being a band. We want to plow through this industry and keep ska in the know. We want to have fun and make other people have fun..... Oh, and tour England and Japan.

Dope Soda: Never Last! Dope Soda will always give more and more and more and more. Viva la Ska Fest! We would also like to add in there that. this band would not be the band it is today, with its immense sound, without Anatol McGuinness, Phil Hamelin and Andrew Rollins. The group as a whole is what makes this band.