Interview with Chris Demakes of LESS THAN JAKE 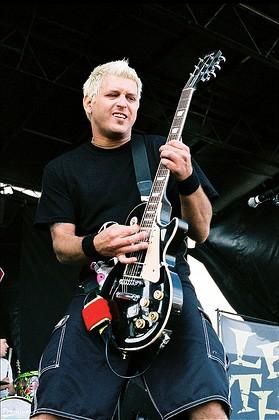 For people who don’t know much about your band, you were on a major label for a while, Capitol Records, right?

Chris Demakes: We were on Capitol in the 90s for about 5 years and we got released from that contract in 2000. And then we signed to Warner Brothers in 2002 and we were with them until 2007. So spent five years with Capitol and five with Warner and we put out a record on Fat [Wreck Chords] and we’ve been with a ton of indie labels as well.

You’re happy now to not be associated with a major label though?

Demakes: Well, if it was 1996 it would be one thing, but being a band [that’s] been around for as long as we have, an older band, there’s nothing a major label can offer us. Labels aren’t selling CDs. A label deal right now, being on a major for us, they’d want part of our touring revenue they’d want part of our merchandise at shows, not to mention our retail merchandise and what’s in stores. So it wouldn’t be a good thing for our band. But if it were the 90s, and a major label had money and we were selling CDs, they could maybe put us on the radio and get us to a different audience, that would be one thing, but in this day and age it makes zero sense for us to be on a major label.

The times have definitely changed, which brings me to my next question because you guys have been pretty internet savvy for a while. You were releasing streams of your concerts and stuff back in 2000 when that was really quite a new thing.

Demakes: And it was literally just x’s and o’s and numbers. There were no graphics, no pictures. It was just “Less Than Jake” and I think there was a bulletin board that fans could message or something. We had a guy at The University of Florida in Gaineville, where we’re from; he was a buddy of ours that would go on to work for NASA of all things that was an engineering genius. He made this webpage for us in 1995. It was great when we put out Losing Streak in 1996, our first major-label record on Capitol Records, we were trying to get the marketing people to put our songs on The Capitol Records page and they were like “What are you talking about?” And we were like “Yeah, we should put up one of our mp3s on the site.” And they were like “Why would you do that?” And that’s why the majors fucking screwed themselves, because of that type of thinking. And we told them all the time that this is where technology is going. Like maybe if we put our songs up and people can hear it, maybe they’ll go to the store and buy it. And the labels weren’t buying it back then. So we’ve been doing the internet thing for quite some time.

You’re like visionaries, man. You were ahead of the curve there.

Demakes: Yeah, I’d like to think that. We definitely were. We were always grass-roots with our mail-order and we’d always write people back. We definitely had a platform and a good structure for this band when we started out and the internet only helped us.

I want to talk about Gainesville a bit. I’m always fascinated by how different towns become meccas of music. Do you know what I mean? You can go way back and talk about Memphis and Nashville and the big cities. But then Gainesville, Florida is a hub of music in general, and especially punk and indie music as well. Why do you think that is?

Demakes: Well, it’s a college town. If it wasn’t for the college, I think it would be just another little Florida town. Gainesville, there’s not much there except for the college. And the college has 50,000 people enrolled in it. And every 4 or 5 months, new people come in and people leave. It’s a transient town. There are a lot of people moving in and out that there are so many people to meet to get integrated with, to form bands. It’s a really easy place to network. It just so happens quite a few of bands have gotten popular out of there and it’s just like anything else, like the Seattle thing that happened. A few bands start to pop up and it’s like “What’s going on there?” For the bands that are there like us, Against Me! and Hot Water Music, some of those other bands, it’s just funny to us cause it’s just a little town in Florida that we call home.

Right. And it’s not just bands but the record labels as well. No Idea Records. Paper and Plastic is from there I believe as well. Vinny from your band is like a record mogul. [Laughs]

Demakes: No, you could consider him that. He’s definitely been into doing records. He did Fueled By Ramen before he did Paper and Plastic. So that was his thing to do before that. But he’s always been into putting out records.

And I’ve read somewhere he has a toy company too.

Demakes: Yeah, kind of. That’s called Wonderland War, but it’s kind of under the umbrella of Paper and Plastic. Everything gets sent out from his office, his headquarters. [They’re] two separate companies kind of but it’s under the same guy.

Personal question, and you don’t have to answer, but I couldn’t really find out a lot about you. Are you a family man? Do you have kids and stuff like that?

I was going to ask you if you had seen the film, The Other F Word, but you’re not a father so—

Demakes: Oh, well I know Jim [Lindberg, singer of Pennywise and star of the film] really well. I haven’t seen the movie but I know the premise of it and I’m sure it’s really cool. I actually want to check it out. I think there’s a book of it too.

Yeah, I think it started as a book actually that Jim wrote, and then they made it into that documentary afterward.

Demakes: I’m going to have to check that out.

Demakes: Vinnie and Roger [Drums, bassist/singer in Less Than Jake] just recently had children last September. Their kids are both a year old and they were born four days apart and it wasn’t planned. [Laughs]

Demakes: Yeah, I’m not opposed to settling down and having kids but up to this point I’ve chosen music as my lifelong girlfriend. So here I am.

Very good. How many Warped Tours have you guys done?

Demakes: I can say we’ve played more warped tours than any band.

That’s fantastic. Maybe this is a broad question, but how has that tour changed over the years? You hear some people say it’s become more corporate or the music’s changed. Since you’re a guy who’s been to a lot of them, how have you seen that evolve?

Demakes: I always stick up for Kevin Lyon, the owner of The Warped Tour, because you have your naysayers and people that bitch. But you got to realize, in the mid-90s when warped tour was started, what was popular? Punk rock. Like Green Day, Rancid and The Offspring were on the radio. NOFX was starting to get big, Pennywise was making a name for themselves, Bad Religion had been kicking around for years. That’s what was popular and that’s what was selling tickets. If all those things would still sell tickets now, all those bands would be on The Warped Tour. The fact of the matter is that it’s 15 almost 20 years later since Warped Tour started. It’s just different now. Have they sold out? No, Kevin wants to put asses in seats. It’s how he makes money. That’s his business. In fact a lot of people are like “Why do you still do that tour?” Now we go out there, and we’re the only ska-punk band out there. Back in 97 or 98 there’d be seven or eight bands with horns and it would be like “Which one’s this one? Which one’s that band?” Go out there now and we stick out like a sore thumb. Mostly due to the fact that we’re the oldest band out there (laughs) and that our music is different from the emo-screamo-flavour-of-the-month whatever’s going on right now.

To catch another interview with Chris and some live performance footage of Less Than Jake in Victoria, check out Absolute Underground TV on Youtube: http://www.youtube.com/watch?v=LQhrIfRgnn0

Jason Lamb is a Victoria-based comedian, radio-host, writer, and punk-rocker. You can catch his own online punk-show at http://www.thezone.fm/category/punk/, and listen to him every weekday morning on The Zone 91.3 in Victoria.