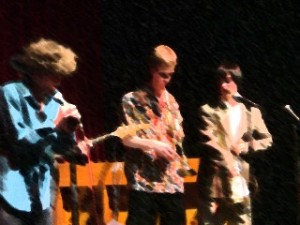 When the call for submissions to the SkaBlog registered with me, I immediately thought of all the memories of my first band, One Track Mind, who D’Arcy Briggs (now organizer with the Victoria BC Ska Society) played trombone for with gusto and pizzazz. It all started at the bleachers of Oak Bay High. Juan Worth, who at that time had a reputation for being girl crazy and displacing immaturity of technique development on percussion with sheer enthusiasm, asked me if I wanted to be in his ska band. I needed a genre clarification, and the explanation about upbeat and fast music with horn gave me a vague idea which had no correspondence to the sound we would eventually forge. At this band member solicitation was Dylan Kelk, who had his trumpet in his case, eagerly awaiting class after our meeting. He was the force of talent behind the band’s instrumentation. The parts he would create to a rolling three chord riff would make the song more intricate and moving.

So on Fridays we would hike to Rachel Flowers’ basement where her older family had the equipment necessary to jam and record single input onto cassette, thus the name One Track Mind. Rachel had this steadfast way of staying true to the guitar line, sometimes keeping the beat in time more than anyone else with her low-key grooves. Rachel’s darling mother would often have authentic Salish smoked salmon, beckoning us even more rampantly toward the music den.

After shuffling positions a few times I wound up in front of the microphone and I began convulsively blabbering about what two years before, when I was twelve, had been an all out obsession: Pokemon. First practice and we had already written a song!

Justin Longpre was an original gangster in a fedora who shared his cigar with me before a gig. I feel bad because we had a dispute over ownership of bass/song writing credits where mistakes were made and irreparable damage to our friendship was done even after amends were made.

On our first show at the Oak Bay Auditorium for a talent show, the lighting effects dude asked us what we wanted, and we told him to have creative license and go to town. We hit the crowd with a thunderous rendition of our Pokemon anthem and when the post chorus trumpet blew it exuded a triumphant conquering of our outskirted position in the social fabric. Jumping into “Goats are Scary,” “ Pirate Pete,” and a ballad against racism, we showed a broad range of topics and psychological states since we were too young to sing about beer and failed relationships.

When we opened for the Hoochy Girls at the Gary Oak Room, I was so nervous that I smoked my first cigarette five minutes before going on, and I had the spins so much I forget even the basic lyrics of “Internet Porn"'s verse. That show, the all-ages crowd seemed to be louder than the amps, but it was good experience that propelled us to deepen our content with new songs like “Perfect Alliby” and “Nobody Knows.” My vocal capabilities were getting honed and I was taking my role as band leader more seriously until my family situation became entirely unbearable, and I flew practically overnight to California, without as much as a word to members of One Track Mind.

It was something I had to do at the time, and they rebounded with a renewed effort called Acquired Taste. When I got back I jammed occasionally with Dylan with me on drums.

I write a column called What Can We Do Now? for a publication which can be found at.http://littlebonemagazine.weebly.com/

I HAVE ALSO CONTINUED RECORDING SOLO AS SCOTTY HOODZ. http://www.youtube.com/channel/UC_5ut5Eo_3nrtLCRLrAkXwQ