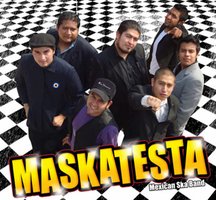 Oi and olé! Seven-piece Latin-ska band Maskatesta combine their home-grown Mexican sounds with a love of English two-tone ska, frosty beverages, and having a good time. The band formed in 2002 and has toured extensively throughout Mexico, Central America and South America. The band has released five demos and albums, including 2008’s “¿Que quieres que te diga?” (“What do you want me to say to you?”)which was recorded in Mexico and Argentina, with the collaboration of the Mario Sipperman Fabulosos Cadillacs, Miguel de Dulces Diablitos, Mariano "Pelado" Potatoes or ask among others. De este disco se desprenden temas como "Tan simple como el amor", "La condena" y "Chica YeYe", “Viviré”, “One night in dolly´s”, entre otras. This disc is off songs like "As simple as love," "Conviction" and "Chica Yeye", "living", "One night in Dolly's," among others.

Maskatesta have a bright future ahead of them and our excited to make their first ever trip to Canada for Victoria's 10th Anniversary Ska Festival (July 8th/2009)!