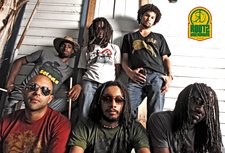 Revolution reggae music - edgy, raw, natural, roots... They are Rootz Underground. That is their sound.
Kick down the walls, burn the paper the rules are written on and mash down the “box” that limits a sound to a single genre! Rootz Underground is here to channel the musical vibration that rings true in the heart and soul of all the conscious Rebel Rockers, Late Night Revelers & Soul Seekers! Many influences have borne their 'rootz', including their homeland Jamaica - birthplace of Rastafari and other radical movements, JAH - creator of all things, family, the earth in all its glory, the revolutionary 70's, Dub and Roots Reggae music.

Synergy is a beautiful thing to witness and when delivered onstage with a raw energy live and direct its even more captivating. Its this synergy that has brought Rootz Underground forward across the last nine years of the bands journey from small underground club shows in Kingston at venues such as The Village Café and Red Bones all the way to the largest stages in Jamaica including Sunsplash, Rebel Salute, Welcome to Jamrock, Reggaelution, Sumfest and Air Jamaica Jazz & Blues repeatedly. The band consists of six core members that have been placed together through fate and friendship along the road of life in Jamaica with music as the common ground. Its here with the mix of these personalities and varied interests that the intricate recipe for the diverse sound comes together and gets expressed in this modern twist on roots reggae. Rootz Underground is Stephen Newland (lead vocals), Jeffrey Moss-Solomon (rhythm guitar, vocals), Colin Young (bass), Leon Campbell (drums), Paul Smith (keyboards, vocals) and Charles Lazarus (lead guitar).

Rootz Underground has been blessed to be able to be amongst the return and rise of the band format coming out of Jamaica, at a time when dancehall and hip-hop are in the forefront they found themselves as a group performing lyrically conscious original ‘roots’ reggae music. Over the last decade they have won their fans and the respect of their contempories one explosive show at a time showcasing and projecting a collective energy that captivates audiences with its pure intention. It is with this ability to engage and hypnotize that Rootz Underground has set out on the tour trail, traveling through the Caribbean, North America and Hawaii in an effort to carry the message of upliftment, positivity and oneness. The year 2008 saw them touring America extensively on joint bills with foundation powerhouses such as Gregory Isaacs, Israel Vibration, The Wailing Souls, Dean Fraser as well as acts such as Anthony B and Tarrus Riley. They have played both the Raggamuffins Festival as well as The Sierra Nevada World Music Festival in California and most notably they also released their debut album “MOVEMENT” in early March.


MOVEMENT has benefited from a sophisticated team, crafting some of the greatest recordings in reggae today. Each track of this 19-song set tells a vivid, nuanced story with moody - Jazz influenced guitar solos, nimble keyboards, ethereal segues, delay effects, traditional African/Jamaican hand drums, razor sharp mixing and call and response chorus vocals that find members harmonizing in agreement with the lyrical message. A rich sound, full of careful layers, serves as a comfortable bed for some of the most universal and honest lyrics to rest in a reggae mix. This sound also has a serious rock music sensibility with breakdowns into hard-hitting grooves, intense builds and smooth transitions back to the one-drop reggae rhythm. The album’s use of interesting vignettes takes us into the realm of the underground and beyond to position ourselves in the movement for a closer listen.

The future is wide open with a heavy load of goals that have been set by the band who are constantly looking forward, 2009 will see the release of the second studio album entitled “GRAVITY” as well as touring focus on Europe and South America. Also in an effort to get the live vibration on stage out there faster than they can even travel the band is offering a full length live CD for free which can be downloaded from the E-store of their website, the album is titled “ALIVE” and was recorded on the “Reggae Train Tour” Fall 08 across America. This along with other unorthodox web strategies shows the trend that Rootz Underground has set and plans on maintaining for the future.

Passionate work, joy in the blessing and humility along the journey sums up the attitude with which each musician moves forward and through the power of the Most High and with his Grace they shall continue to reap the positive fruit of their labour.