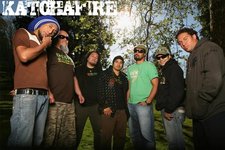 Katchafire is New Zealand’s Premier Reggae Band. Since 2002 they have recorded three full length albums, a dub remix album and a Live CD. With years of touring under their belt, the band is constantly in huge demand in New Zealand, Hawaii, Australia and around the world.


They present an infusion of the roots reggae lineage with an undeniably Maori sound.

From humble beginnings ‘jamming’ in a garage, Katchafire is a melting pot of unique members, including two generations of one family and diverse musical perspectives – yet this blend is exquisitely aligned with the essence of reggae which can be an expression of social and political persuasions, hardship and pain, relaxation and reflection.

Dubbed New Zealand’s hardest working band by national media, Katchafire have now completed numerous national and seven international tours. The band has moved audiences around the globe with three tours in New Caledonia, one tour in each Fiji and Hawaii and 10 Australian tours.