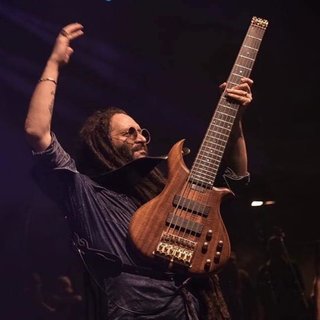 Sicilian reggae artist Alborosie refers to himself as the Italian Reggae Ambassador, building on a lifelong love of roots reggae and slowly becoming one of the more unlikely dancehall and reggae stars in Jamaica. The son of a retired police officer, Alborosie taught himself to play guitar, bass, drums, and piano. By 1993, when he was just 15, he was playing in the Italian reggae band Reggae National Tickets, billing himself as Stena. In 2001, he decided to leave the group for a solo career, and moved to Jamaica to be closer to the musical culture that had so inspired him. It wasn't an easy move, and the singer even got his moniker by affixing the "Al" from his name to the derogatory Jamaican term "Borosie," a sharper reading of "jerk" that got thrown at him a lot early on in his new home of Kingston. He began work as a sound engineer and producer, participating in projects by artists like Ky-Mani Marley, while still continuing to work and develop his own material. He released his first solo album, Soul Pirate, in 2008, which generated a lot of positive critical attention internationally. He followed it a year later in 2009 with Escape from Babylon, which continued to build his fan base. 2 Times Revolution appeared in 2011, while Sound the Systemlanded in 2013. (A dub version of the latter album, Dub the System, landed later that year.) The year 2014 saw a pair of compilations: Specialist Presents Alborosie & Friends rounded up the singer's early singles, while Sound the System Showcase collected a set of remixes. A 2015 dub album Dub of Thrones found Alborosie getting the royal dub treatment from King Jammy. His 2016 effort, Freedom & Fyah, added more electronics, dub, and dubstep to the mix, along with guest appearances from Protoje and Ky-Mani Marley. 2018's Unbreakable: Alborosie Meets the Wailers United was one of the singer's best-received albums to date, featuring collaborations with J Boog, Jah Cure and of course members of the Wailers. The album rose to the Top Ten of Billboard’s reggae charts. Artist Biography by Steve Leggett