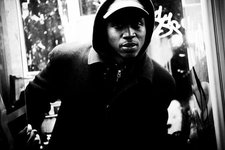 With his soulful vocals and expressively poetic lyrics, Toronto-based Kae Sun has a lot to bring to the table, including the diverse and unique background that so strongly shaped his musical style. Influenced by a vast array of performers, as well as elements of his birthplace Ghana, the up-and-coming musician has established a distinct style that is constantly developing and always sincere.

Born and raised in an artistic and culturally-rich household in Ghana, Kae Sun was exposed to music, story-telling, and performance—ranging from church choir and traditional Ghanaian folk chants to his father’s soul records—at an early age. By the time he moved to Ontario in 2001 to focus on his musical career, Kae Sun was ready to expand his horizons, taking cues from classic musicians like Bob Dylan and Neil Young and branching out from his predominantly hip-hop inspired material to include instruments and melodic vocals in his music. Armed with a new understanding of and outlook on music as a whole, Kae Sun released his first full-length demo, which earned him a 2006 Hamilton Music Award. Inspired by the success of this demo, Kae Sun decided to record an EP entitled Ghost Town Prophecy, and tour Canada in support of the release.

The lessons learned and experiences gained from his extensive exploration of music ultimately contributed to Kae Sun’s most recent release, Lion On A Leash, which he produced much of himself. Currently, the inspiring musician is based in Toronto, where he still performs, both solo and with a band. Having already participated in festivals like the Hillside Music Festival and Pop Montreal, Kae Sun is no stranger to the stage.