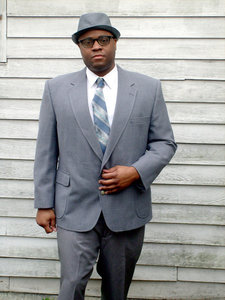 Honeyboy Carencro grew up in New Orleans, Louisiana, and vividly remembers, as a child, hanging out with his mother and listening to records on her old school home stereo where she would play artists that were heavy on the scene. She played that were rich in blues, soul and jazz history. “Most of the best music ever made came out of New Orleans,” claims the singer, producer, and multi-instrumentalist, who counts Muddy Waters, Howlin Wolf, Bo Diddley, and Chuck Berry, along with New Orleans music pioneers like: The Meters, Fats Domino, Snooks Eaglin and Dr. John among his influences, but draws the most inspiration from the music of Otis Redding, Sam Cooke, and the legendary productions that were coming out of the Chess Records era and Stax Records era.
The “retro or throwback” tag is added to almost any contemporary work that sounds like it was originally recorded between 1950 and 1974, and Carencro, is among the new breed of artists to the genre, and he is aware of how trends come and go. After being signed to the upstart New Orleans based record label Rolling Fork Records by a&r rep Corbiss Humberger, the wheels were set in motion for him to record his upcoming album "The Widowmaker"." I have always been into doing music form the heart and I am giving you all I got with this album." says Carencro.