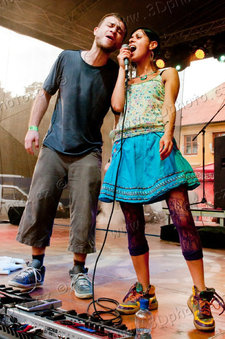 Dub FX (real name Benjamin Stanford) is a worldwide street performer and studio recording artist from St Kilda, Melbourne, Australia.[1] After playing and singing in a band called Twitch, he set out solo when he moved to Europe. His trademark is creating rich live music using only his own performance aided by Live looping and effect pedals combined with his voice.[ He creates intricate hip hop, reggae and drum and bass rhythms

DUB FX travels and performs with his fiancée, Flower Fairy. Dub FX first met her in Manchester, and she joined him in his travels around the globe to busk for the public. Flower Fairy can usually be seen selling CDs during Dub FX's performances and also performs a few songs alongside him.
Dub FX is completely independent using only: live performance, word of mouth, internet social networking and a number of easily accessible free samples.

Dub FX is also the main founder of the label Convoyun.ltd which could be described as a co-op label for Dub FX's own work and other people's.