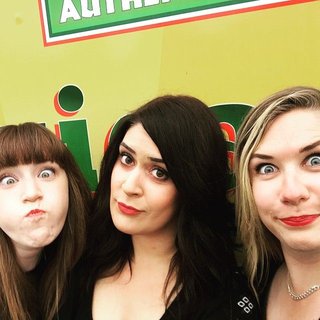 Fox Glove is an all-female trio based in Victoria BC that brings together elements of folk and alt pop to create a genre they like to call “Fox Pop.” Renn Madeleine Bibeau, Claire Butterfield, and Chelsea Kanstrup have very different voices and ranges, but together they create a unified blend that has been compared to that of bands like the Staves and the Good Lovelies.

These three foxes met in the University of Victoria Vocal Jazz ensemble in 2011, and struck up a musical relationship that couldn’t be ignored. A month after the band's inception, they were playing at a number of venues in Victoria, becoming a biweekly fixture at a popular local eatery. Fox Glove started out as a cover band because of their instant need for material, but they recreated each song they played. From Bob Dylan to the Lumineers to Miley Cyrus and everything in between, Fox Glove shaped the songs with their harmonies to create distinctive versions of anthems that you may or may not already know. Soon, each member began to introduce their own songs into the mix, until they sat down one day and started combining their styles and writing songs as a team. They now have a growing collection of Fox Glove originals, which bring together elements of each member’s personality and writing technique. Each song is stylistically different from the next, providing listeners with a stimulating musical ride.

Accompanying themselves with a suitcase-full of instruments, including guitar, ukulele, and banjo, Fox Glove entertains their live audiences, filling in the spaces with banter that has caused listeners to (cheekily) suggest a career switch to stand-up comedy.

Fox Glove released their self-titled debut EP last year, engineered and produced by Jason Cook in Victoria BC. The release show for the EP was an almost-sold-out musical extravaganza at classic Victoria venue Fairfield United Church in March 2014. Other highlights from the last year include making the regional finals of CBC's Searchlight Competition, having their song "Does This Scare You Yet?" featured on the soundtrack of the film Two 4 One, acting as the "house band" for the CBC's annual food bank fundraiser, and playing Rifflandia in September 2014. 2015 started off with a bang, with two appearances at Song and Surf Music Festival at the beginning of February, their Vancouver debut at the beginning of March, and a new record produced by Sam Weber, to be released in the early summer. Fox Glove will appear on a number of stages over the next few months, including the Tall Tree Music Festival.