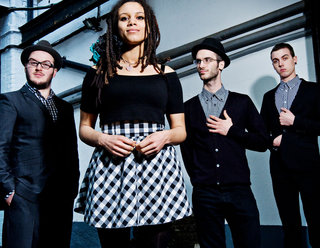 The Skints are one of the one most vibrant, energetic and exciting bands working in reggae today. UK’s Clash Magazine called them “the torchbearers for modern British reggae,” and the genre couldn’t have better ambassadors. The Skints combine so many facets of the reggae family tree – dub, ska, two-tone, punk, dancehall, hip-hop – the band creates an entirely unique, wildly unpredictable style. With dynamic male/female harmonies and grimy rapid-fire dancehall raps, the Skints paint vivid sonic portraits of hard city life in London over top of sunny dub reggae with way more heavy bottom end than they have any right to use. 2015 saw the band take another huge step forward with the release of their third full-length LP FM, released on Easy Star Records. The lead single “Ratatat” is as nasty a hip-hop track as you’re going to hear anywhere while still maintaining the underlying sunshine of the band’s reggae roots.