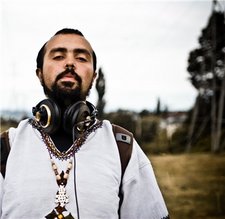 Gabriel Teodros is the everyday journeyman with more stories to tell than most people twice his age. Having seen both city and countryside through the eyes of a struggling artist and immigrant child, Teodros spins observations and wordplay into internationalism on wax. Linking first and third world people's struggles, he is sincere when he says "we in this together son, your beef is mine."

From ciphers at Westlake to spending months in Vancouver and Brooklyn, Gabriel's story is one of trial, tribulation and a search for redemption. The contrast of his onstage ferocity with his offstage humility reveals a multifaceted spirit who understands that the political is personal. Whether addressing political repression and resistance in East Africa or reflecting on the effects of patriarchy in his relationships, Teodros captures each moment soulfully with his unmistakably (north)west coast delivery.

Teodros has left a mark in the underground NW hiphop scene as one half of the duo Abyssinian Creole (with emcee Khingz & DJ WD4D), and since the late 90's has been seen rocking microphones from classrooms to theatres, clubs, stadiums, protests, prisons to street corners alongside the likes of Zap Mama, Fishbone, KRS-One, Digable Planets, Souls Of Mischief, Kanye West, Lupe Fiasco, Ozomatli, The Coup, GZA/Genius, Aceyalone and Bahamadia to name a few. Even before dropping his solo masterpiece, 'Lovework,' Teodros already had love from a community who eagerly anticipate his next story to tell.

Since the release of 'Lovework' Gabriel Teodros reached #1 on the CMJ Hip Hop Charts, released 4 music videos, was featured on NPR and in URB Magazine's "Next 100", and has been recieving rave reviews everywhere from Rolling Stone to Okayplayer.com Gabriel has also been staying busy on tour in support of the 'Lovework' album, working with youth in South Seattle & doing whatever he can to help other artists get their voices heard while recording the future classics right out of his home.