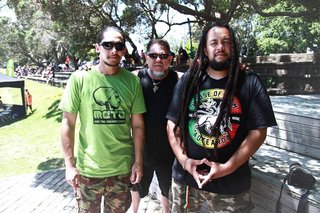 Over the best two decades, New Zealand has proven itself to be one of the strongest reggae hotbeds in the world. Groups like Fat Freddy’s Drop, The Black Seeds, and Katchafire have proven themselves to be held in the echelon of reggae elites. Continuing this tradition of killer kiwi reggae is Aotearoa’s House of Shem. Comprised of Carl Perkins, a member of the New Zealand Music Hall of Fame with his former band The Herbs, and his two sons, House of Shem’s songs are marked by syrupy-sweet melodies and sun-drenched vocal harmonies. Their 2011 sophomore album, Island Vibration, even shot to number 1 on the charts on its first day of release. Already bona fide stars in their homeland, House of Shem are coming in hot for their Victoria Ska & Reggae Fest debut.