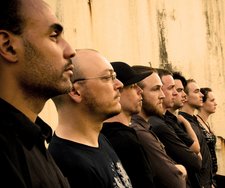 When John Brown’s Body released their fifth studio album in 2005, the band looked forward to the happy grind of touring to support the release. With Pressure Points hailed by critics as “their strongest, most consistent effort to date,” [Popmatters] JBB set out on tour and continued their efforts to conquer the world. Little did they know that they were about to go through a series of events that would significantly change the band. They endured the death of bassist Scott Palmer, the departure of several long time members (including singer and co-founder Kevin Kinsella), and throat surgery for lead singer Elliot Martin—enough challenges to end the career of many groups. Instead, JBB emerged with a brand new line-up and a fearlessness born out of this musical near-death experience.

In January 2006, just after Scott had been diagnosed with gall bladder cancer, the band embarked on a cross-country tour. This proved to be the true catalyst of the transition. The band recruited local Boston bassist Nate Edgar to replace Scott; he had been a fan since seeing Scott playing years earlier with DJ Logic’s Project Logic. Organist/guitarist Nate “Silas” Richardson stepped out to spend more time with his newborn son, so JBB turned to its past to replace him: they tapped guitarist Mike Keenan, who had been a member of the Tribulations, the pre-cursor to JBB in the early ‘90s, that featured Kevin, Elliot and drummer Tommy Benedetti. JBB played to extremely enthusiastic audiences over the course of the month. By the end of the journey, they had also lost their horn section.

“After that tour, I wondered all the time whether JBB would continue,” says Elliot. Tommy, the only other original member left, says that “when Scotty passed away [on June 7, 2006], that was a breaking point for people who may have been considering leaving. With something as heartbreaking as that, there was an obvious bookend in this band’s career, so it made sense for some folks to take the opportunity to leave.”

One of those people was Kevin Kinsella. Kevin had been talking about leaving the band a few times before that, but never took the final step. “With Scott’s death, I think he wanted to close the chapter on this band he had started and tie it all up neatly,” Elliot says. “He wanted JBB as an entity to cease. The only problem was that Tommy and I were really enjoying playing with the new guys and still felt like there was a lot we wanted to accomplish.” Even though things seemed to be falling apart around them, Elliot and Tommy both felt a powerful new energy playing with Nate, Mike and freshly recruited organist Matthew “Kofi” Goodwin. After a few different incarnations, the horn section was also reassembled, featuring Alex Toth and Annakalmina Traver (who both lead Rubblebucket Orchestra when not on duty in JBB), as well as trombonist Scott Flynn.

Kevin’s departure actually freed Elliot to lead the band in new musical directions. For years, there had been a creative rift between the two primary songwriters and childhood friends. Kevin’s songs tended towards religious themes and roots reggae sounds, more in line with the group’s beginnings. Elliot’s writing emphasized futuristic and atypical rhythms, as well as dense metaphorical imagery. “I used to think that having two songwriters and vocalists was a strength that made us unique, but it probably confused a lot of people. Now our sound is more cohesive,” says Tommy. “We feel comfortable with one another and you can hear it in the music we’re creating.”

While Elliot had only contributed a few songs to the first few records, by Pressure Points, the balance had shifted: Elliot wrote 8 of the 11 songs on that album. During the tense last months with Kevin, Elliot decided to make an attempt to bridge the gap between him and his old friend, writing three rootsier tracks (“Give Yourself Over,” “Speak Of The Devil,” and “Be At Peace”). When Kevin quit, Elliot found himself with three anchors for the next album, and for the first time, much less pressure to make everything fit within a perceived JBB sound. Feeling unrestrained, Elliot next wrote “The Gold,” a more uptempo drum & bass-inflected tune featuring a guitar line reminiscent of an Ennio Morricone spaghetti western soundtrack, and “Make Your Move,” which takes the group closer towards hip hop. The title track was actually one of the oldest musical ideas to come to fruition on the record. Elliot says, “The seeds for that one are five years old. It was originally a hip hop beat, like a Funkadelic song. The bass line was the same, but much more slinky. I didn’t know what it would become, but I knew it should be the lead for this record.”

“I think that the strongest reggae was coming out of the UK in the 70's and early 80's,” Elliot explains. “It was the best produced, had the most complex songwriting; it’s the most progressive reggae that's been made. Steel Pulse, Aswad, Reggae Regular, Misty in Roots, Mikey Dread, Dennis Bovell and Linton Kwesi Johnson were doing groundbreaking stuff. I want to pick up where those artists left off. Of course, we don't come close to what those artists did, but I think that's where the idea comes from—that reggae can take other forms. I guess I'm just saying that I see our music as progressive reggae.”

Other artists Elliot listened to extensively--and was influenced by--while writing Amplify include Sigur Ros, Batch, Toumani Diabate, Sly and Robbie, Radiohead, Talib Kweli, Aswad, Funkadelic, King Tubby, Roots Manuva, Masaru Sato and Midnite (whose lead singer, Vaughn Benjamin, lends a vocal to the end of “Speak Of The Devil”). Certainly not the typical play list for a reggae band, but the band’s deep reggae roots are not hard to find amongst all of the other influences.

The last of the big life changing events of the past few years involved Elliot’s voice and threatened the band’s ability to soldier on once more. Fittingly, it was during that same January 2006 tour that Elliot began to notice problems with his vocal strength and endurance; after months of doctor’s visits and vocal training, the problem was finally revealed to be vocal polyps. Elliot not only had surgery in early 2008 to remove them, he also began voice training to teach him to put less strain on his throat. “I feel better every day. Each show back after surgery, I could feel myself getting stronger. Now I think I’m doing things I couldn’t even do before,” Elliot says. “Add that to the energy of the new line-up and this new batch of songs, and we can’t wait to get back on the road. It’s going to be fun!”