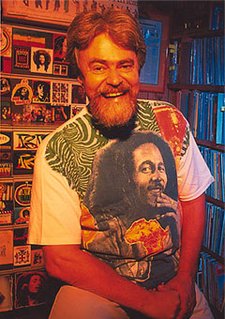 Without a doubt, Roger Steffens is the world's most authoritative voice on Bob Marley. Steffens accolades include actor, author, lecturer, photographer, editor and producer, but he will tell you that his greatest achievements came as a Reggae Archivist and Lecturer on the life of Bob Marley.

It all started when Roger was blessed with a copy of The Wailers "Catch a Fire" album. For three weeks it never came off of his record player. Over the years, Roger met the most important figures in Reggae music, including Bob Marley with whom he became great friends. It was while traveling with Bob on the 1979 US West Coast leg of the Survival Tour that Bob nicknamed him ROJAH.

Ras Rojah started building his collection of Reggae artifacts in 1973, and he now has the largest Reggae music archives in the world. Specializing in Bob Marley and The Wailers, his archives are located in two separate buildings at his home in Los Angeles. Included in his collection are thousands of hours of unreleased tapes, an exhaustive collection of vinyl and CDs, hundreds of videos, hundreds of T-shirts, thousands of posters and Reggae buttons and a vast array of collectable items. Much of what Roger has is one-of-a-kind or never-before-heard.

Roger has traveled across the globe, educating fans about Reggae music and the life of the Reggae King. Last year he has been invited to Israel, Australia, New Zealand and South Africa to name a few places.