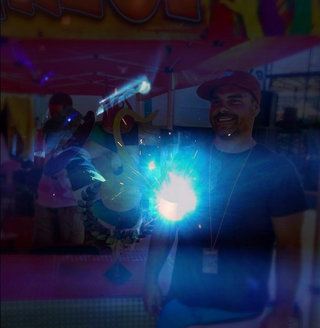 Ry Williams honed his welding skills on a volcanic island in the Pacific Rim of Fire. He was taught by a master metal-smith the secret ways of ancient lava moulding. Part of the training included creating and then being branded by a hieroglyphic emblem, forged from a meteorite.
In Ry’s spare time he has been creating the armature for dinosaur bones, bronze age swords and woolly mammoth tusks. Although his metal art is owned by some of the worlds wealthiest people, most often Ry is known to gift his art away.
When asked about why Ry wanted to get involved with the Rocksteady Art Exhibit, he said, “The music is amazing, the creativity is amazing, the people are amazing, but the thing I love the best about the Victoria Ska and Reggae Festival is the overwhelming vibes of love.”