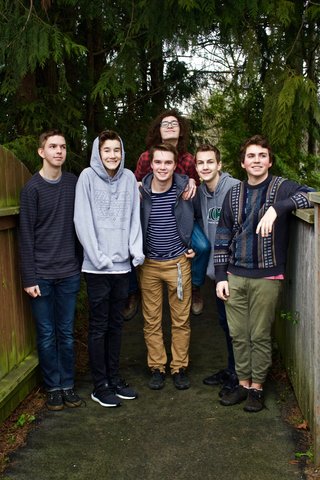 The Phatfunks are a group of 6 talented young musicians hailing from Victoria, Canada. Ranging in age from 16-19, the band attends local high schools, and the University of Victoria. They combine Old-school funk, R&B, and Jazz Fusion, with a rock-solid rhythm section laying the groundwork for powerful, tight horns, resulting in a groovy, infectious, and danceable sound, influenced by the likes of Maceo Parker, Parliament-Funkadelic, Snarky Puppy, and Lettuce. The group met while playing in a local Jazz training band, the UJAM Young All-Stars, and was formed in 2014, jamming on the weekends in Sascha’s parents’ practice shed. Since those days, they’ve gone on to perform many shows, from private events, to bars, to fundraisers, to local markets, or even school dances. During the summer, the group performs as a quartet, busking in downtown Victoria. Over 3 summers, the band has gained popularity as a staple in the Victoria busking scene, becoming known for their energetic and entertaining shows. Currently, the band is preparing for an EP/Video Project.