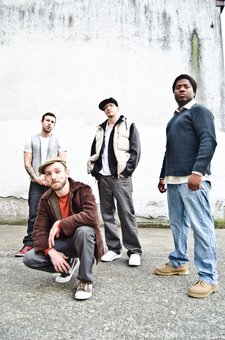 NATURAL FLAVAS is a unique project , simultaneously an original band while also working as a backing band for touring artists. Under their own name Natural Flavas produces original reggae that parallels the current Jamaican scene while remaining uniquely Canadian. They’ve gained quite a reputation locally , opening for Toots & The Maytals , Inner Circle , The Easy Star All-Stars and emerging Jamaican stars Rootz Underground on their first appearance in Western Canada. As a backing band Natural Flavas have sealed their connection to the roots of reggae over the past few years, backing Jamaican legend Ken Boothe , Tosh1 - youngest son of original Wailer Peter Tosh, and Canadian reggae star Steele. Band Leader/ Singer/ Guitarist , Patrick “Dr.Watson” Quine , has also had the pleasure of playing bass for Jamaican stars Alton Ellis and Half Pint as well as a “who’s who” of artists from Canada’s large Caribbean community. Some of Vancouver’s finest - Allan “Double Down” Ollivierre (Keys) , Jonny “Jon Boops” Holisko (Drums) and J.C. “Coop” Thompson (Bass) round out the core of a line up that ranges from 4-8 people depending on the size of the stage. The future looks bright for Natural Flavas, who are set to release their first full length album ! As we say “No artificial additives - 100% Natural Flavas.” !!