NEVILLE STAPLE (formerly of the Specials) & HIS BAND 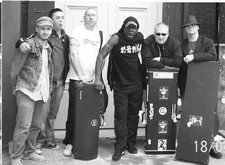 Best known for his work writing & composing, the lead singer from The Specials,
and as one of the founding members of Fun Boy 3, Neville Staple is credited with changing the face of pop music not only once but twice. Neville's biography and past projects read like a who's who of rock. He has worked with such legends as Elvis Costello (The Specials 1979 – Chrysalis Records), David Byrne (Fun Boy 3 Waiting 1983 – Chrysalis Records), and Ali Campbell (Today's Specials 1996 - Kuff Records/Virgin), to name only a few. His talents are found on the unique tribute album, Searching For Jimi Hendrix (1999 - Capitol Records) a project that Neville is personally quite proud of. In addition to having recorded with some of rock's most famous, he has also shared the stage with such icons as Ranking Roger (English Beat) forming Special Beat. Although this line-up never actually recorded an album they successfully toured the U.S. with Sting and Steel Pulse, which ultimately lead up to their own headline tour.

Some of Neville's recent projects and collaborations include hooking up with Roger Lomas, in Coventry, England to record Skinhead Girl and Conquering Ruler for Trojan Records (UK), and co-producing with John Avila (Oingo Boingo) The Best of The Specials & Fun Boy 3 Performed by Neville Staple for Cleopatra Records in Los Angeles, CA. In America Neville was also in the studio with Unwritten Law recording on tracks for their release, ELVA for Interscope Records. Desorden Publico the Venezuelan ska band met up with Neville in Miami the Fall of 2000, to record the track, “Black Market Man” on their album El Diablo – Guerra Sound Rounds 2000 (Venezuela). The band has release this song as a video as well in heavy rotation on MTV Espanol. You’ll find some of Neville’s newest solo work on VANS, Off the Wall Volume IV compilation CD. In 2002, released on Cleopatra Records Special Ska Au Go Go. This CD features Neville’s own original tracks with some old skool songs in the mix.

Since 1998 Neville has been on a mission to entertain, successfully touring Japan, South America and extensively touring North America with his own band.

On their upcoming tour Neville Staple (vocals), Andy Perriss (guitar), Warren Middleton (trombone), Winston Marche (drums), Steven Armstrong (Bass) aka Sledge & Liam Dixon (keys) will be delivering an awesome set which will include a host of new music by the band plus some of your favourite Specials songs. For the past two to three years band has toured all over the UK, Australia, and Germany. The band is as seasoned as they come with extensive experience playing with other bands such as Bad Manners, Maddness, The English Beat, Jamaica's Alton Elis and many more! Collectively Neville Staple & His Band will give other bands a two-tone 101 class session!