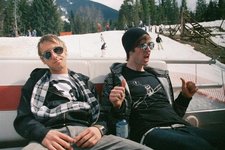 The intellectual indie hip hop (intelledindiehop aka nutella.dinner.hop) duo known as Animal Nation first came together in 2004.
The Story?

Steige "Tall Man" Turner was going through a not-so-brief faze of "dream-waking". A condition in which the sufferer absolutely cannot tell the difference between being awake and being asleep, usually brought on by stress or lack of sex. The now-well-received "Tall Man LP", which had already been pressed in Turner's dream state, was just a vision yet to be constructed in the real reality known as now. During one of Turner's earlier dreams he envisioned himself in a land much like the Disney rendition of Robin Hood: a land of walking, talking, interacting animals of all sorts living just like humans, with humans. Though not necessarily a strict devotee of the Science religion, Turner did believe in the theory of evolution, and the fact that humans and animals alike are exactly that: animals. The concept was born.

The touring that followed the actual release of the Tall Man LP brought on even more stress for Turner, which, in turn, led to worse and worse episodes of dream-waking. The plus side of the paranormal dreaming was that Steige seemed to have gained a sense of awakening and seemed to be able to almost tell what was to come. (He actually estimated the exact amount of CDs sold on the Tall Man tour five months before recording had even started on this album!) This was why it was no surprise to him when he first met Mike "Armadillo Slim" Armitage on tour.

Another band had just finished a set, and Steige, who thought the act was "absolutely out of this world", couldnt help overhearing somebody ranting to anybody and everybody that "that was the worst piece of shit Ive ever heard! I could make better music with my eyes closed, underwater!" Steige couldnt help but confront the gentleman and ask the man why he thought that. The two exchanged words for nearly four hours. Steige eventually asked him if he had actually tried making music before. As if on cue, Slim pulled out a CD and a thick black marker and wrote across the cover: "Get Bent", along with his phone number. Even before having a listen Steige knew that Armadillo Slim was to be the other half of Animal Nation... I mean, hes a fricken armadillo for Pete's sake!