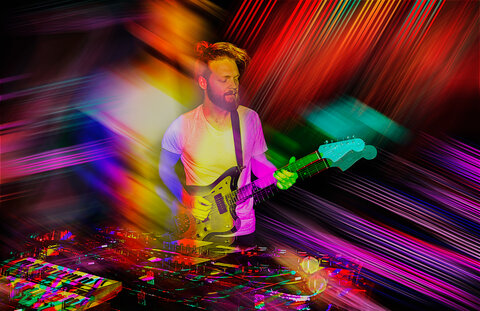 Often referred to as a “Human Jukebox,” Mark Woodyard – simply known to many as WOODYARD – has deep musical knowledge, unbound by genre conventions, allowing him to hop between feelings and sounds however he sees fit. A multi-talented musician who uses looping machines, his voice and his guitar, Woodyard is best known for his wide-array of genre-bending covers that showcase his vocal range and eclectic sounds, creating utterly unique performances every time he takes the stage. With no two shows sounding the same, Woodyards improvised style calls to mind legends like Reggie Watts and Marc Rebillet – a multi-instrumentalist who can captivate an audience and spark fires on the dancefloor.

Born and raised in North Vancouver, Woodyard is no rookie, having been a part of the live music scene for the better part of two decades – a journey that seen him take the stage at some of the world's most renowned festivals like Shambhala, Bass Coast and Envision. You may not know what you're gonna get when Woodyard takes the stage, but you can be absolutely sure that whatever he brings you, he's going to make you DANCE. 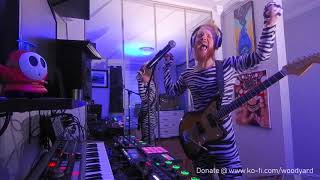 Fort Knox Five, Mark Woodyard, Blasé Blasé, Mo Moshiri, Grossbuster, Jennay Badger
@ White Eagle Polish Hall
Sat. February 26th 19:30
$25 - 29.95 advance  Buy Tickets Online
While the roots of modern groove lay in funk and soul, much of modern groove is tended to by DJs and electronic producers, and no one is doing more work in tending the groove garden than the mighty FORT KNOX FIVE. Garden City Grooves is very excited to welcome Fort Knox Five back to Victoria for the first time in over three years. From Washington, DC and recently relocated to Canadian west coast in BC, Fort Knox Five has remained at the vanguard of rhythm and groove since their inception nearly 20 years ago (2003). Through their label Fort Knox Recordings, their massively popular Funk The World mix series and their legendary appearances at some of the most important festivals in the electronic world – like Bass Coast, Shambhala, Burning Man, for example – FKF has long been established as one of the premier places to get deep grooves that are guaranteed to make your mouth smile and your ass shake.

As mighty as Fort Knox Five is, they won’t be coming alone as they’ll be joining forces with Vancouver’s “Human Jukebox” MARK WOODYARD for a very special headline performance. Armed with his guitar, his voice and loop machines, Woodyard is a talent unlike any other in the area and we can’t wait to see what groovy delights he and Steve of Fort Knox Five are going to conjure up. Garden City Grooves is very stoked to welcome BLASÉ BLASÉ to our stage for the first time. Comprised of members of some of Victoria’s most iconic acts, Blasé Blasé is making some seriously smooth and warm chilled-out hip-hop. The band has been hard at work during the pandemic creating new music and honing their live show, and they’re sure to be coming back out of the gates HOT.

Also on the bill is our long time friend and west coast hip-hop veteran MO MOSHIRI, who will be flanked by another friend of ours, GROSSBUSTER. An alumnus of iconic group Sweatshop Union, Moshiri has established himself outside of the group as an MC who always brings his best on the mic. His rhymes are thoughtful, deep and full of capital-L Love and his beats straddle the line between old-school and nu-school. Last, but certainly not least Garden City Grooves is so proud to finally welcome powerful JENNAY BADGER between the 1s and 2s. A Vancouver transplant that cut her teeth and established herself here on Vancouver Island, Jennay Badger has proven herself to be one of the most dynamic and forward-thinking DJs in the west coast game right now.

We seriously cannot wait to get SWEATY on the dancefloor with all of our groove-seeking friends for a serious Saturday night throw-down.