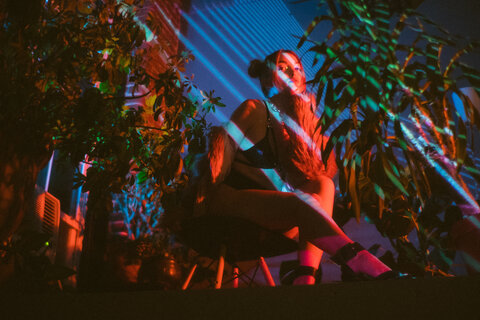 FAWNA is the solo project of Canadian singer/songwriter Jenna Deagle-Potter. Rooted in her passion for R&B, Jazz & Electronica, FAWNA reels you in with a refreshing vocal soundscape of sultry chill-hop vibes. With two EP’s and several releases under her belt, she continues to make her mark creating music and touring across Canada.

Starting out, Jenna sang in an array of different bands in the Halifax indie scene. Searching for new opportunities, she left for Montreal in 2013 to start her solo career and finish her Intermedia/Cyberarts degree. Jenna was quickly immersed into the Montreal music scene performing around the city and working with other local artists. The FAWNA project materialized out of Jenna’s urge to make something her own, merging together her love for music and video.

Her first EP titled ‘Vol.1’ dropped in October 2016 with the single ‘Take It Or Leave It’, which was released with a music video that she directed and edited herself. In 2019 she released “CLEAR”, an R&B infused collaborative EP with Brooklyn producer Cobrayama. Since then FAWNA has collaborated with a variety of producers and musicians worldwide, most recently with FRASE, Illa J, and Atamone.

Touring Eastern Canada as a solo artist with performances at Evolve and Future Forest Festival for 3 summers in a row, several performances in Montreal, and a recent stage appearance in Kelowna, BC - FAWNA is working on multiple collaborations, her Vol. 2 solo EP, and planning her Canadian tour for Summer 2022.