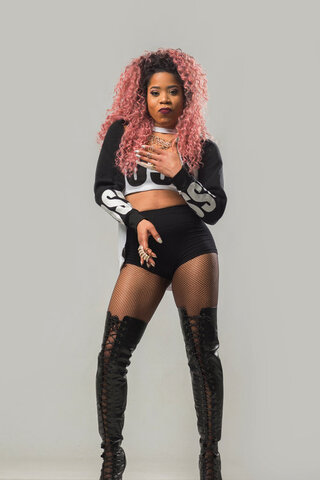 K’reema is one of the freshest new melodic voices on the international music scene. She is a very powerful vocalist ,a creative songwriter and producer. After quitting her 9-5 job as an EMT New York based singer/ songwriter K'reema has been taking the music scene by storm. With her sultry fusion of pop/r&b sound to her hard core reggae roots K’reema continues to leave her fans mesmerized and captivated with her power vocals and performance.
Born in Kingston, Jamaica, K’reema has been surrounded by music all her life. Being the daughter of one of Jamaica’s most revered Dancehall stars, the legendary King Yellowman, she was born in it! She is also the niece of the “Revelations” fame, Reggae singer Abijah, and her late maternal grandfather, Winston Smith, is also a founding drummer in the legendary The Mystic Revelation of Rastafari. Music is literally in her blood.

From a very young age, it was evident that K’reema was destined for greatness. While growing up she would parade around the house singing the songs of her favorite singers, often mimicking her idols, such as the late Whitney Houston. Her family and friends were always impressed with K’reema’s ability to showcase her talent at such a young age. K’reema began writing poetry at the age of nine. By the time she was 11 years old, she began writing songs, the first titled ‘One More Chance’. In the ensuing years, she pursued her music career by performing in local talent shows, including the famous Tastee’s Talent Show, which happened to be the very same show that catapulted her father to his fame.

Since then K’reema continue on to tour in the US, Japan , Europe and most recently the UK. K’reema didn’t stop there as she continues to carve her name in the music industry by being one of the first female artist to own her own label titled Yellow Baby. No surprise there this name was inspired by one of her father’s hit songs. After creating this family label her first line of action was to release her father King Yellowman first album in over 15 years.

K’reema later released music of her own as well as her recently-launched line of apparel branded ‘zunguzunguguzunguzeng’, a phrase made popular by her father Yellowman. The apparel was launched to continue and refresh her father’s legacy.