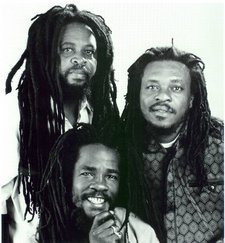 One of Jamaica's signature harmony groups, similar to Jamaican music legends such as Culture, the Mighty Diamonds and the Wailing Souls, the Itals were chiefly responsible for keeping the sound and spirit of roots reggae alive well into the dancehall era. When they finally made the leap to LPs in the '80s, they attracted highly positive notices from many reggae aficionados, even despite the fact that roots was rapidly growing passé in Jamaica with the advent of dancehall reggae. Hits such as "Ina Dis Time," (described by Keith Richards of the Rolling Stones as being 'the perfect reggae song') and "Give me Power" provided more credibility to the band right until today as their accolades have included a Grammy Nomination, inclusion in Pollstar's top 100 artists among many more. After recording steadily during the '80s, they remained a productive touring unit for over 25 years performing countless shows worldwide. Backing the original Itals lead vocalist, Keith Porter. Now, with the release of “Mi Livity,” Mr. Porter steps a little further out front and demonstrates why good reggae music allows no labels or limitations.