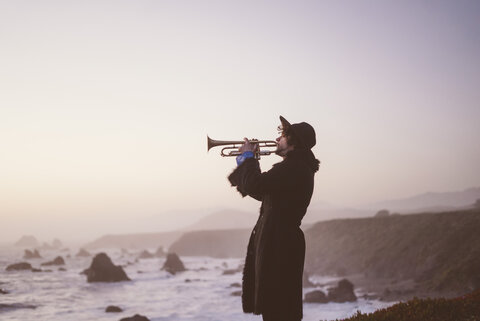 Balkan Bump is the newest project from trumpet player, producer and ethnomusicologist Will Magid.

Balkan Bump, Jonnie 5 Brass Band, Kia Kadiri, Ranger, Mt. Doyle
@ White Eagle Polish Hall
Thu. February 23rd 19:30
$22.50 - $29.95  Buy Tickets Online
We're getting Garden City Grooves 2023 kicked off the only way we know how – by delivering a true smorgasbord of diverse grooves to the people! Festival headliner BALKAN BUMP is set to make their first-ever headline performance in Victoria for this huge opening night show. For the last few years, Oakland's Balkan Bump – the latest project from trumpet player, producer and ethnomusicologist Will Magid – has been making waves up and down the west coast, establishing Balkan Bump as one of the most exciting and inventive live acts going today. Combining live instrumentation with deep electronic grooves and smouldering bass, Balkan Bump melds the worlds of live and electronic music in a way that few can. Backed by support from legendary producer Gramatik when the project first hit the scene, Balkan Bump took that momentum and hasn't slowed since. It's been more than three years since the last time Balkan Bump took the stage in Victoria and now, touring as a trio, their headline performance at this years Garden City Grooves promises to be a can't-miss show for music lovers and dancers of all stripes!

Also taking the stage for our opening night are our longtime friends JONNIE 5 BRASS BAND, who will be joined by one of our favourite west coast MCs, KIA KADIRI. With deep musical knowledge, a big rhythmic sound and an unyielding amount of musical chops to keep the whole thing going, Jonnie 5 Brass Band gets the dance floor moving every time they take a stage. As their forces combine with Kia Kadiri's deft, thoughtful rhymes, Jonnie 5 Brass Band is fixing to lay something more than memorable on Garden City Groovers this year. Getting things warmed up in the smoothest way imaginable is Victoria's quickly upcoming soft rock/soul outfit RANGER. A Ranger show is sure to fill up your heart and soul with their smooth, uncluttered melodies and thoughtful, textural instrumentation.

Kicking things off and keep the dance floor spicy between bands is one of our favs and a local legend in his own right, the mighty MT. DOYLE. One of deepest wells of musical knowledge and the skills to mix seemingly anything, there aren't many more reliable party rockers in these parts than Mt. Doyle. Ain't no one better to help us kick off what's going to be our biggest year to date!

Note: At this time, White Eagle Hall is not wheelchair accessible.