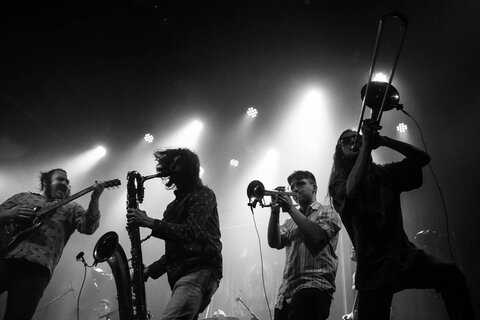 Born from the fusing of nine Winnipeg, Canada based musicians, Apollo Suns have created a refreshing and innovative sound and live performance combining instrumental, jazz, rock and psychedelic music. They were awarded “Instrumental Artist of the Year” at the 2018 and 2020 Western Canadian Music Awards.

With each Anatol, Aaron, Glenn, Bryn, Niall, and Erika having studied music at the U of M and CMU along with their previous bands including other genre-bending acts such as The Dirty Catfish Brass Band, Super Duty Tough Work, Moses Mayes and Sapphire Empire; there has been no lack of musical creativity amongst the band. Apollo Suns constantly challenge themselves in their writing by constructing jazz influenced songs with the end goal of maintaining an overall accessible and catchy track for listeners of all backgrounds.

Their debut EP, Each Day a Different Sun, was released April 2017 followed by a Western Canadian tour in support of the release. They have since been through Western Canada twice and Eastern Canada once. The album spent seven weeks on the Earshot! National Top 50 charts with its top position at #15.

Apollo Suns released their sophomore EP, Dawn Offerings, in late April of 2019 with two sold out shows in their hometown of Winnipeg, MB. The release was followed by multiple tours and festival showcases across Canada to support the album. The album reached number #7 on the Earshot! National Top 50 charts.

Having recently signed with USA based record label COLOR RED they will be releasing their third EP, A Relationship of Force, in late 2021 and supporting the album with a robust North American tour itinerary in 2022/23.

Apollo Suns are an exciting band out of Winnipeg who are not afraid to walk a fine line and pave their own musical path to success and into the hearts of music fans all over Canada and soon internationally. With the recent signing to Cielo Talent Agency (Western USA) and Loose Leaf Agency (Eastern USA). They will be working closely with the band to book, schedule and execute tour dates in the USA. 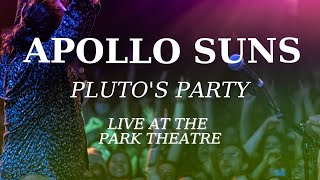 The New Groovement, Apollo Suns, Sexweather, DJ All Good
@ White Eagle Polish Hall
Sat. February 25th 19:30
$22.50 - $29.95  Buy Tickets Online
We're closing out Garden City Grooves 2023 with the triumphant return of Victoria's titans of funk, THE NEW GROOVEMENT. The New Groovement has come a long way since they rocked the very first Garden City Grooves nearly a decade ago. In that time they've long established themselves as one of the coasts go-to acts for serious funk. With newly solidified lineup and lots of new music in their arsenal, it's immediately evident that The New Groovement has hit a new milestone in their life as a band – attacking their songs with relentless energy and vigour. The band has always had some of the most refined musical chops in the city and somehow they seem to have only grown stronger. A New Groovement show promises big horns, big raps, and even bigger grooves. If you like music that makes you dance and feel good, you don't want to miss your chance to catch the New Groovement in one of the nicest venues to see music in the city.

We are very excited to have Winnipeg's APOLLO SUNS joining us for their Garden City Grooves debut! The Winnipeg 9-piece have marked their territory as one of the most refreshing and innovative live acts with their incredibly unique mix of jazz, rock and psychedelia. The immense talents have twice earned them “Instrumental Artist of the Year” at the Western Canadian Music Awards (2018 and 2020). Their music is a sonic gumbo of groove, guaranteed to get any dance floor – in this country or any other – dancing and jumping with reckless abandon. This is surely going to be a show that our groove-lovin' audience isn't going to soon forget. Also on the bill for our big closing party is one of the straight-up coolest bands Victoria has produced in some time, power-trio SEXWEATHER. Every time Sexweather gets up on stage their reckless joy radiates from the stage and infects the audience. A roller-coaster of musical ideas, seemingly unbound by genre constraints. Whatever music they're playing, Sexweather plays it HARD.

Getting things started and keeping the temperature up between bands is Vancouver Island legend, DJ ALL GOOD. One of Canada's most renowned turntablists and the proprietor of The Turntemple – a mobile DJ base that tours the Island, spreading a knowledge and love of DJing – the Naniamo homie DJ All Good is one of the true keepers of the art and culture of DJing and we are stoked to have him with us as we close out Garden City Grooves in serious style.

Note: At this time, White Eagle Hall is not wheelchair accessible.