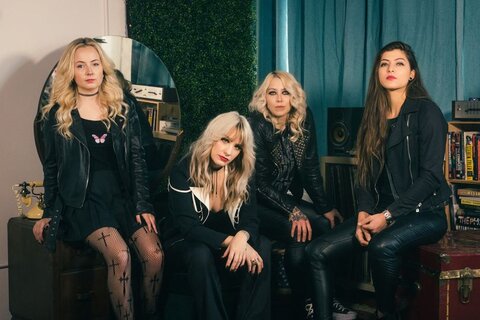 A staple of the Toronto scene for over a decade, The Anti-Queens are an ultra hard-working, punked up rock n' roll quartet of super high-powered women who give the male-dominated music industry a run for their money. They've become infamous in their hometown of Toronto for their insanely high-energy, take-no-prisoner live performances.

The Anti-Queens are gearing up to release their second LP in 2023 - produced by Dave ‘Brownsound’ Baksh & Steve Rizun. The band has previously self-released two stellar EPs (Grow Up/Stay Young and Start Running) and released their killer full-length debut on Stomp Records in Fall of 2019.

The Real McKenzies, The Anti-Queens, The Grinning Barretts
@ White Eagle Polish Hall
Fri. March 3rd 19:30
$19.50 - $23 advance  Buy Tickets Online
The Real McKenzies have been a staple in the Victoria BC Ska & Reggae Society family for almost 20 years dating back to when they played at the Victoria Ska Festival in 2007 with Neville Staple of The Specials, Mad Caddies, St. Catherine's and JFK and the Conspirators.

Over the years the band has evolved and had some incredible talent that have carried the torch of The Real McKenzies' Paul McKenzie throughout the ages. Their last show with us in Victoria was just after the pandemic when we were able to reach full capacity and sold it out. The show before that was the day before the lock down in March 2020 and we sold that show out as well.

And now we're back where we started doing this wonderful all ages show at White Eagle Hall with our new friends The Anti-Queens (also off the Stomp Records label). They played on a multi-bill with Russian Tim & Pavel Bures, Doghouse Rose & DTK in November 2021 and now they've come back for their encore performance with The Real McKenzies.

The Grinning Barretts who also played with The Real McKenzies in March 2020 just before the lockdown, will bring their bagpipe strangling, vocal chord mangling, gormandizer uplifting celtic punk rock to round out the bill.