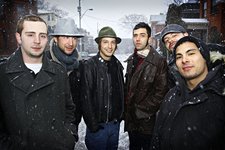 The Saint Alvia Cartel is Burlington Ontario’s latest contribution to [good] music…. And these guys are no strangers to the music scene as they have all enjoyed stints with former and current projects including: Boys Night Out, Jersey, The Video Dead, and hardcore legends Grade.

Having ended his relationship with Boys Night Out, Rob Pasalic swore off booze, drugs, and mainly music. After getting word of the demise of legendary punk rock band Jersey, Greg Taylor (Jersey/Grade) bumped into Pasalic and revealed a brand spanking new vision: The Saint Alvia Cartel.

Pasalic comments on the inception of the band that is named in homage to Ernest Alvia “Smokey” Smith (Canada’s last and most decorated veteran). With their roots firmly planted in punk-rock, the band also draws inspiration from almost every genre out there: roots, rock and roll, blues, soul, dancehall reggae, country, new wave and hip hop.

The Saint Alvia Cartel gave the world a taste of their eclectic and infectious melodies after recording and releasing a couple demo tracks via MySpace in 2006. It was enough for Montreal’s STOMP RECORDS, who inked the deal over a few beers as soon as they got the chance. The album was produced by the infamous Justin Koop (Grade, Silverstein, The Reason), and features 13 lucky tracks that can only be described as awe-inspiring. The video for their debut single “Don’t Wanna Wait Forever” is currently in medium rotation at Much Music with radio features on commercial radio across the country. Launch parties are scheduled for late May along with tourdates across Ontario and Quebec including a couple stops on the Vans Warped Tour. The Saint Alvia Cartel’s self titled release is THE summertime album for 2007. ‘Nuff said.
.
"A cunning and bold sound that breaks all rules that every genre has put forward, making St. Alvia my number one pick for 2007" - PUNK RADIO CAST

So we liked “A Poet’s Life”, Tim Armstrong’s first solo—and primarily ska/reggae album—which reminded us we love this punk flavored spin on the roots and island sound. But sorry, it wasn’t the kind of pioneering work found on the refreshingly non-punk, self-titled release of the Saint Alvia Cartel, which is bubbling with pop/ska/punk crossover appeal, all with a re-imagining that is totally fresh. Reminiscent of the frontiers that Big Audio Dynamite’s Megatop Phoenix broke through, TSAC are fearless in their toying with punk and pop tropes, combining danceable roots aesthetics with Pabst Blue Ribbon-gruff vocals (“Try To Forget”). There’s poppier crossover stuff (“Time To Go”) and delay-washed ditties (“Business As Usual”) that would make The Edge’s lawyers squirm. But The Saint Alvia Cartel, who look as though they would sound like Latterman, are anything but business as usual. - 4/5 - ALTERNATIVE PRESS