The Toasters are America's longest running Ska band. Formed on the lower east side of Manhattan, NYC in 1981, they have carved out their own niche in history, amassing along the way a humongous catalogue of music, including twelve albums, a score of singles and ep's, and innumerable compilation appearances. The band has logged a staggering 4,000 live concert appearances on stages all around the world. In 1997 Billboard's front page dubbed them "New York's Ska pioneers" as they have skanked where no man has skanked before, infiltrating their trademark sound behind the Iron Curtain and infesting the steamy jungles of Brazil. With their eclectic, instantly recognizable and idiosyncratic sound the group has been branded as "the Miles Davis of Ska" by the California press.

Now kicking off their 23rd year of tearing it up The Toasters show no signs of relenting, 2002's eagerly- anticipated new album "Enemy of the system" was released on California's Asianman records in the USA and on Grover records in Europe. Now the crew is at work on a new project to be released on MOON SKA EUROPE. Expect a single and video over the summer to underpin a stand-alone 14 date UK tour in the late summer. The "BACK IN TROUBLE AGAIN'' album will feature the same line up as EOTS. Teaming up with veteran Toasters Bucket (guitar), Jack Ruby Jr. (vocals), and Larry Ace Snell (drums), are Mark Darini (bass) and Jeff Richey (sax). This year's model also features the return of trumpet impresario Lord Sledge as well as the addition of cult trombonist Buford O'Sullivan and special guest appearance by Dave Barry on keys. The polls indicate that this is the best side that the Toasters have ever fielded!

The band is currently playing dates in the northeast and kick off their USA national tour in March. The boys will be in the Midwest and Canada in May. Immediate plans also include a return trip to Mexico in June (caramba!) as well as a Southeastern USA swing in the fall. A full European tour will take place in November. Meanwhile the song "I'm Running Right Through the World" is featured on a current Michelob commercial. The bands music continues to be syndicated worldwide on the on Nickelodeon's KABLAM!

In photo: The Toasters 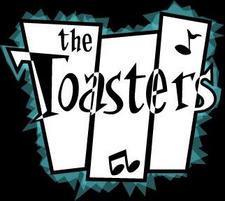