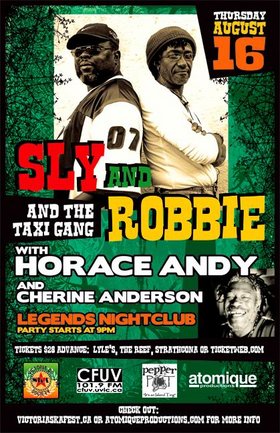 Thu. August 16th 2007 @ Element Victoria BC (No Minors)
9:00 pm - 2:00 am
$28.
Tickets at: Lyles Place, Ticketweb.ca, The Reef, Strathcona Hotel, Jamaican Jerk House
Presented by: Victoria BC Ska and Reggae Society, Atomique Productions
SLY & ROBBIE
Theirs is the ultimate musical marriage, a partnership that, once formed, re-etched the very landscape of not just Jamaican music, but the entire world's. Such hyperbole is oftentimes rolled out by publicity machines whenever two musical talents come together, but in the case of drummer Sly Dunbar and bassist Robbie Shakespeare, it really was an earth-shattering union. Their rhythms have been the driving force behind innumerable songs -- one statistician estimated that together they've played on approximately 200,000 tracks, and that doesn't count remixes, versions, and dubs. As a production team, the pair has been the equivalent of a creative storm, the cutting edge of modern dub, ragga, and dancehall.

HORACE ANDY
Horace Andy aka (Sleepy) first came to public attention at the tender age of 19 when he started to hang out, audition and eventually record for the legendary Studio 1 label, which was fast gaining a reputation as the "Motown Of Jamaica". He recorded a succession of classic singles:"Fever," "Just Say Who," "Every Tongue Shall Tell" and "Skylarking" among them. Horacethen switched to working primarily with Bunny "Striker" Lee, and his singing and songwriting talents then came into their own. He cut gems like "You Are My Angel" and the anthemic "Money Money." With his unique crying vocals, the hits kept coming.Over the next few years Horace collaberated with the like of Neneh Cherrry, Sly & Robbie, Morwells, Prince Jazzbo and gained a new audience internationally when he collaberated with Massive Attack

CHERINE ANDERSON
" THE PRINCESS OF DANCEHALL SOUL!!! Cherine Anderson has starred in two of Jamaicas most successful films; Dancehall Queen and One Love. She has written and recorded with respected producers and musicians including Sly & Robbie, Sting, Wyclef Jean, Bootsy Collins, Jimmy Cliff, and graduated with honors from the prestigious Middlebury College with a Bachelor of Arts in Film and Music and a minor in Japanese Language and Literature. Never one to pass up the opportunity to work on her craft and knowledge of the industry, Cherine spent many of her college summers interning at companies including MTV Networks, Interscope Records and the Chris Blackwell owned Palm Pictures and Palm Records.

“I call my music DANCEHALL SOUL: a mixture of reggae dancehall, soul, R&B and a little lover’s rock. Behind the beat is a message. It incorporates the grittiness of my past with the sweetness of things I’ve been exposed to.”

Cherine has been focusing her attention on writing music and collaborating with a team including Sly & Robbie, David Norland (Madonna, Janet Jackson, Dallas Austin), JeekyMan (Lil Kim), as well as young Jamaican producers such as Fateyes and Michael Jarret (Sean Paul). With reggae/urban radio stations in Jamaica, US, Canada, some European countries, as well as internet radio already playing her debut single “Good Love”, (using the same riddim as Jimmy Riley’s smash hit “Love and Devotion”), Cherine looks poised to make a serious impact in the reggae and urban markets. Cherine’s second single, “Cookie”, has been gaining steady airplay. According to the Jamaican Star, “…if the song “Cookie” gets the proper marketing locally and internationally, it ‘Mus Buss’…it can go places and has tremendous potential.” The up-tempo “Cookie” shows Cherine’s diversity and ability as a songwriter to create a song that can inspire and entertain, and speak to younger audiences. The video for her hit single “Good Love” peaked at #2 on the Jamaica’s top video chart, and is currently # 3 on South Florid's reggae charts. Good Love continues to be heavily rotated on the nation’s two major networks as well as cable channels. The video is also being played on BET Jazz and MTV Tempo. According to reggae legend Sly Dunbar, “Cherine is the real deal. A truly strong vocalist on hard core reggae riddims with the ability and potential to surpass Jamaican audiences to reach the masses.”