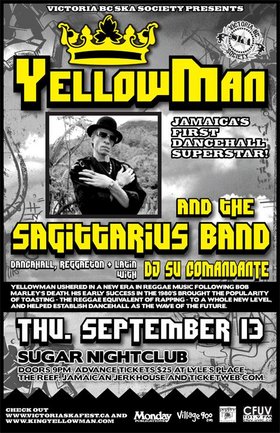 Thu. September 13th 2007 @ Capital Ballroom Victoria BC (No Minors)
10pm - 2am doors at 9pm
$25 when purchased in advance
Tickets at: Lyles Place, TICKETWEB.COM, The Reef, Jamaican Jerk House, Fascinating Rhythms
Presented by: Victoria BC Ska and Reggae Society
Victoria BC Ska Society & Pepperpot are proud to bring Victoria Jamaica's first dancehall superstar. YELLOWMAN ushered in a new era in reggae music following Bob Marley's death. His early-'80s success brought the popularity of toasting -- the reggae equivalent of rapping -- to a whole new level, and helped establish dancehall as the wave of the future.

YELLOWMAN was one of the most verbally nimble toasters of his time, with a loose, easy flow, a talent for improvisation, and a definite wit in his wordplay. Plus, all the boasting about his prowess on the mic or in the bedroom had to be over the top to be convincing: true to his stage name, Yellow-man was an albino, which carries a tremendous social stigma in Jamaica.

YELLOWMAN recorded prolifically in the early '80s, at one point flooding the Jamaican market with more than 40 singles. His first full-length album, Them a Mad Over Me, was recorded for Channel One in 1981 and featured the hit title track and the single "Me Kill Barnie," an answer record to Lone Ranger's hit "Barnabas Collins."

After 1983's Zungguzungguguzungguzeng album, YELLOWMAN signed a major-label deal with CBS Records, which encouraged him to maintain the stylistic versatility of his previous work. However, his lone album for the label, 1984's KING YELLOWMAN, sported mixed results, attempting everything from slack toasts to R&B and pop-tinged crossover tracks, including covers of "Sea Cruise" and
"Take Me Home Country Roads," and the much-maligned fusion attempt "Disco Reggae." He subsequently released several albums on Shanachie, including 1984's Nobody Move Nobody Get Hurt, 1985's Galong Galong Galong, 1986's Going to the Chapel, and 1987's Don't Burn It Down. The latter found him delving more into social consciousness; the title cut was a pro-marijuana protest, while "Stop Beat Woman" condemned domestic violence, and "Free Africa" criticized apartheid. Around the same time, he suffered a bout with throat cancer, but fortunately recovered. He returned to action with the hit Fats Domino cover "Blueberry Hill," and moved to the Ras label to record the well-received Yellow Like Cheese album with producer Philip "Fatis" Burrell.

1994's Prayer album (still on Ras) was the first effort in this new direction, and it was followed quickly by Message to the World in 1995. 1997's Freedom of Speech continued in a similar vein, after which YELLOWMAN switched over to the Artists Only label. His first effort was 1999's Yellow Fever, which concentrated on conscious reggae but also featured some good-natured party tracks. New York followed in 2003, and Round 1 in 2005.