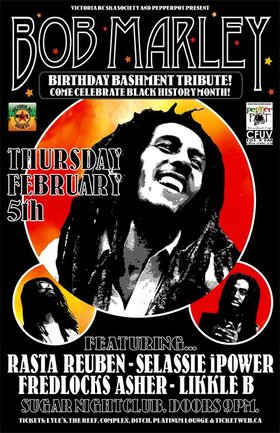 Thu. February 5th 2009 @ Capital Ballroom Victoria BC (No Minors)
10pm - 2am doors at 9pm
$14.50+ advance
Tickets at: Lyles Place, Complex, The Reef, Ticketweb, Ditch Records & Cds
Presented by: Victoria BC Ska and Reggae Society, PEPPERPOT
So it's been a couple years since we had a Bob Marley Birthday Bash here in Victoria, so we thought why not do it again?! It's fun and we have two excellent acts that will do it well plus showcase their own impressive original material. Selassie iPower haven't played in Victoria in almost 10 years but the band had been residing in Toronto and completed a world tour before returning to their present homes in the Vancouver/Lower Mainland area.

Rasta Reuben & Fredlocks Asher (brothers in Selassie iPower) also perform solo and with the Ultra Flex Crew. The band and the two brothers are most excited to make their way back to the Island. Don't miss out on this Bob Marley Birthday Bash! Tickets available NOW;)at Lyle's Place, The Reef, Complex, Ditch Records & TICKETWEB.CA

Don't wait until the door. Get them in advance as it could sell out...