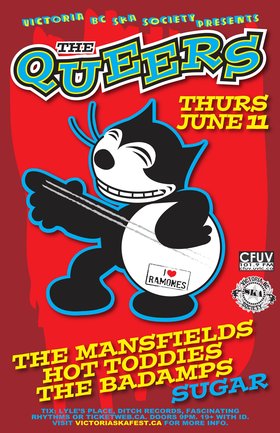 Event Archive - THE QUEERS´ DEBUT IN VICTORIA: The Queers, The Mansfields, Hot Toddies, THE BADAMPS

Thu. June 11th 2009 @ Capital Ballroom Victoria BC (No Minors)
9:30pm - 2am doors at 9pm
$16.50 and up
Tickets at: Lyle´s Place, Ditch Records & Cds, Ticketweb
Presented by: Victoria BC Ska and Reggae Society
Appearing for the first time ever in Victoria, it’s the Queers! The Queers first formed in 1982 in the eastern US city of Portsmouth, New Hampshire. Starting out in the early days as a snotty young punk rock band, the Queers have grown over the years to have a signature style, best described as Ramones style punk rock with a distinctive Beach Boys flavour. The Queers career in the 80s was short lived, but in 1990 Joe Queer reformed the band. The newly reformed Queers went on to achieve notoriety in the 1990s with albums such as Love Songs for the Retarded, and Beat Off. Since then things have never let up, as the band has released album after album of pop punk masterpieces. They have gone on to tour all over the United States, Canada, Europe, Japan, China and other places around the world. Throughout the years the Queers have opened for, toured with and played alongside bands ranging from the Ramones, to the Smugglers, to Screeching Weasel. The Queers currently feature the legendary Joe Queer (guitar), playing alongside long running Queers alumni Lurch Nobody (drums), and Dangerous Dave (bass).

Punk Rock from Vancouver BC
© 2022 Victoria BC Ska & Reggae Society