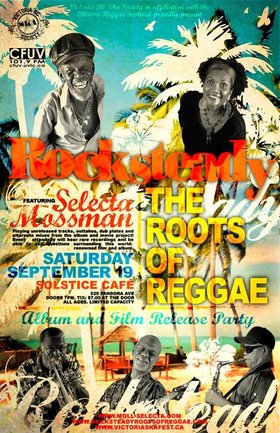 Sat. September 19th 2009 @ The Solstice Cafe & Lounge Victoria BC (All Ages)
8pm - 11pm doors at 7pm
$7 at the door
Presented by: Victoria BC Ska and Reggae Society
VICTORIA BC SKA SOCIETY in affiliation with the Ottawa Reggae Festival proudly present

(Music producer for the film/album)

Selecta Mossman will be playing unreleased tracks, outtakes, dub-plates and alternate mixes from the album/movie project! Event attendees will have the opportunity to hear records they may never be able to hear anywhere else again and ask questions surrounding this world-renowned film/album.

The documentary film Rocksteady: The Roots of Reggae is a musical journey to Jamaicas Golden Age of music, Rocksteady. The film features the music and stories of the legendary singers and musicians of the Rocksteady era. They come together after 40 years to record an album of Rocksteady hits, to perform together again at an All-Stars reunion concert in Kingston, Jamaica, and to tell their story.