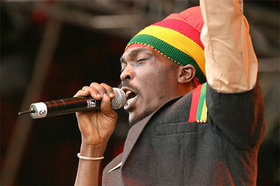 Event Archive - ANTHONY B MAKES HIS DEBUT ON THE ISLAND IN VICTORIA @ ELEMENT!: ANTHONY B, Giraffe Aftermath

This will be one of the biggest reggae shows to come to the Island in some time. Jamaica's conscious bobo dread Anthony B embodies a spiritual and proactive approach in Reggae music. Anthony B has been steadfast in his mission to represent the poor and oppressed, using sharp lyrics to confront political injustices and bring the issues of the people to the forefront. In the process, he has raised the quality of performance standards and lyrical content for the industry, through the release of 13 albums, over 1000 singles and appearances on over 100 albums in the last 14 years.


Anthony B's lyrical genius and his captivating, energetic performance style have caused him to be heavily requested for performances in the Caribbean, North America, Europe and Africa. He was given a King's welcome in Gambia and Senegal. In 2004, he sold out shows in Switzerland, Austria, Sweden, Belgium, France, Italy and Germany; closing for such greats as Israel Vibration and Burning Spear. br />


His heavy touring schedule has not slowed Anthony B's stream of releases. Over the years, he has collaborated with Bone Crusher, Akon, Wyclef Jean, Snoop Dogg, R. Kelly, Martina, an on his latest album, Toots.

Anthony B's rich vocals and audacious lyrics carry a depth and substance which is rare in the industry. Internationally, his fan-base has grown because he speaks about the universal concerns of suffering and salvation. "The greatest thing about reggae music is that it's about concepts and ideas," says the artist, "you are speaking to people on issues they live and can relate to"