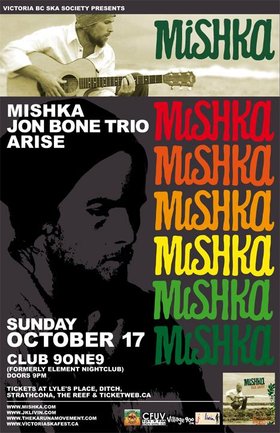 Sun. October 17th 2010 @ Element Victoria BC (No Minors)
10pm - 1:30am doors at 9pm
14.50+ adv.
Tickets at: Lyles Place, Ticketweb, Ditch Records & Cds, The Reef, The Strath
Presented by: Victoria BC Ska and Reggae Society
Sunday, October 17th Victoria BC Ska Society is happy to bring more soulful soothing reggae to Victoria when Mishka (from Bermuda) comes to Club 9one9 (formerly Element). Influenced by the music his parents listened to and what his sister also presented to him traveling the high seas on a boat he is influenced by many different roots reggae and blues artists.

After the creation of his first self-titled album "Mishka" which made various charts in Britain and Japan, Mishka met Darryl Thompson - a longtime guitarist for Sly and Robbie. They were working on Above the Bones (his next to be hit album) when Matthew McConaughey showed up and signed Mishka to his newly formed j. k. livin label.

Following up his #1Reggae Billboard hit album Above the Bones, Mishka has now created his current album "Talk About" which he refers to as an album of movement.