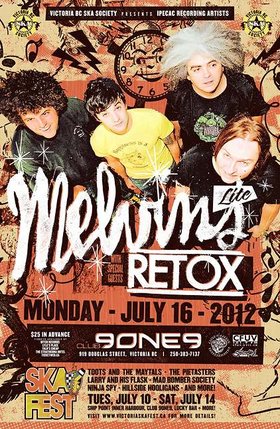 Event Archive - The Return of the Melvins!: MELVINS LITE, Retox

Mon. July 16th 2012 @ Distrikt Victoria BC (No Minors)
10pm - 1:30am doors at 9pm
$25
Tickets at: Ditch Records & Cds, Lyles Place, Ticketweb, The Strath
Presented by: Victoria BC Ska and Reggae Society, Clove And Anchor Entertainment
Victoria BC Ska Society is pleased to announce the return of Melvins LITE. On tour in support of FREAK PUKE - the new Melvins LITE album from Ipecac Recordings. Melvins Lite is an additional incarnation of the Melvins. The line-up is Buzz Osborne, Dale Crover and Trevor Dunn (Mr. Bungle, Fantomas & Tomahawk). Formed in 1983 “The Melvins have a long history of mixing up their line-ups and I think that’s what has kept them relevant for so long,” explains Buzz. “Consider the Freak Puke record the fifth side of the four-sided Melvins triangle." "We had seen Trevor playing upright bass in a jazz setting and thought that we could utilize that for a recording project," explained Crover. "This is something different from the two drummer/big hair line-up, which they plan on continuing with as well." For a limited time you can stream the entire album at Spinner. http://www.melvins.com/ https://www.facebook.com/melvinsarmy?ref=ts http://www.themelvins.net/ http://www.myspace.com/themelvins Opening guests RETOX

Retox was birthed in Southern California, specifically in San Diego and Los Angeles during the later part of 2010. The members; Brian Evans on drums, Thor Dickey on bass, Michael Crain on guitar, and vocalist Justin Pearson. Retox has been described as punk, post-punk, hardcore, metal, and even power violence. But anybody whose ears are not completely damaged by way of decibel pressure or contemporary media will agree that Retox is carving out a unique sound. The best possible description would be sci-fi/surf/punk. The songs are fast tempered clocking in somewhere between one and two minutes. The guitar’s harmony and disharmony battle each other, engaged in an endless standoff. Interwoven throughout the timbre is a driving bass acting as a referee for the rest of the instruments. Propelling the songs are drumbeats chopped up with surgical precision and stamina. The vocals are littered with subtle hooks as well as not so subtle irritation, influenced by political disdain, horror, and sarcasm. The band's inspiration is drawn from both horrific misfortune and sheer imagination. Either way this is good news for the listener.
https://www.facebook.com/RETOXRULES