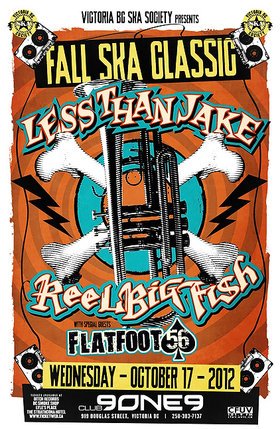 Wed. October 17th 2012 @ Distrikt Victoria BC (No Minors)
9:30pm - 1:30am doors at 8:30pm
$25+ early bird adv./$29.50+ reg adv.
Tickets at: Lyles Place, BC Smoke Shop, Ditch Records & Cds, Ticketweb, The Strath, Fascinating Rhythms
Presented by: Victoria BC Ska and Reggae Society, Clove And Anchor Entertainment
Victoria BC Ska Society is proud to bring a fall party of epic proportions to the Island and Canada's westcoast when we host SKA FALL CLASSIC 2012 Wednesday, October 17, 2012 at Club 9ONE9!

LESS THAN JAKE and Reel Big Fish have both been third wave ska's main institutions over the past 20 years. LTJ first formed as a power pop trio with heavy punk influences into a ska inspired punk band and a with sense of humour that is still present today. Twenty years after initial meetings and pawn shop instrument purchases for new members, Less than Jake is releasing their eighth album titled Greetings and Salutations. The album will drop on October 12, 2012 (five days before this show).

REEL BIG FISH have been around for an equal amount of time as Less than Jake. Hailing from Huntington Beach, Calfornia the band have been through various members and Warped Tours. But the main thing is they're still playing and skanking hard like they did when they started back in the early 90s. This July 2012 the band released their newest album titled Candy Coated Fury which will be featured at The Ska Fall Classic - Wednesday, October 17th at Club 9ONE9!

Rounding out this incredible triple ska bill will be Flatfoot 56 that playing a positive-natured brand of hardcore-tinged Celtic punk.

Get your early bird ticket available online now at ticketweb.ca and in stores Saturday August.25th at Ditch records, Lyle's Place and BC Smoke Shop.