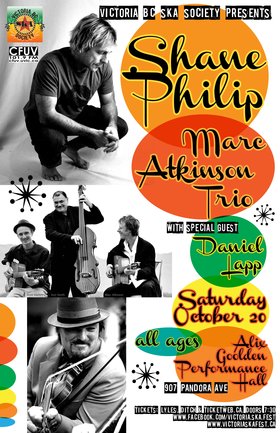 Sat. October 20th 2012 @ Alix Goolden Performance Hall Victoria BC (All Ages)
8pm - 11pm doors at 7:30pm
$19.50 early bird/$22 regular adv. (Members to receive e-mail with discount info)
Tickets at: Lyles Place, Ditch Records & Cds, Ticketweb
Presented by: Victoria BC Ska and Reggae Society
The Victoria BC Ska Society is pleased to announce an exciting combination of Island artists that will bring a high level of musicianship and a beautiful blend of musical styles onto one stage. Saturday, October 20, 2012 at Alix Goolden Hall in Victoria BC, Shane Philip, Marc Atkinson Trio and special guest Daniel Lapp will converge, performing pieces from their respective albums and collaborating throughout the evening.

Shane Philip's last appearance in Victoria was at the Victoria Event Centre in January 2012 when he co-headlined with the Tequila Mockingbird Orchestra. Since then Shane Philip has toured the country once again hitting major festivals this summer. In addition to appearances at Shambahala and performing as direct support to Toots and the Maytals at the Commodore, by the time this concert takes place Philip will have already finished an Ecuadorian tour with Global Electronic Roots artist and producer Adham Shaikh. His anticipated appearance with Marc Atkinson will reunite them once again since their only other performance together at the Victoria Ska Festival in 2011 as the Shane Philip Tree.

Marc Atkinson Trio is musical wonder from the “Marc Atkinson Music” empire that includes “The Quartet,” “Caravan” and the internationally acclaimed roots band The Bills that recently released their fourth album. As one of Canada's most talented guitarists, Atkinson takes guitar beyond the usual repertoire and sound. The tunes have a fiery but elegant guitar style, infused with a catchy blend of influences. His music is described as original, complex and challenging in its conception and delivery but remains accessible and absorbing. The music of the Marc Atkinson Trio good-naturedly welcomes all listeners aboard for an intriguing, exhilarating and unforgettable ride.

Daniel Lapp's career has gone through many evolutions. From his tour stint with Spirit of the West to more recent projects with Daniel Lapp Quartet and Lappelectro that dabble in jazz, electronica and R&B, Lapp will give fans some of his Lappland musical power appearing with Shane Philip and/or Marc Atkinson on selected pieces throughout the evening.

With all of these musicians residing in Victoria or other parts of Vancouver Island/Gulf Islands, together these three premier acts will provide a full evening of entertainment that will be remembered for years to come. http://www.shanephilip.com http://www.marcatkinson.com http://www.daniellapp.com