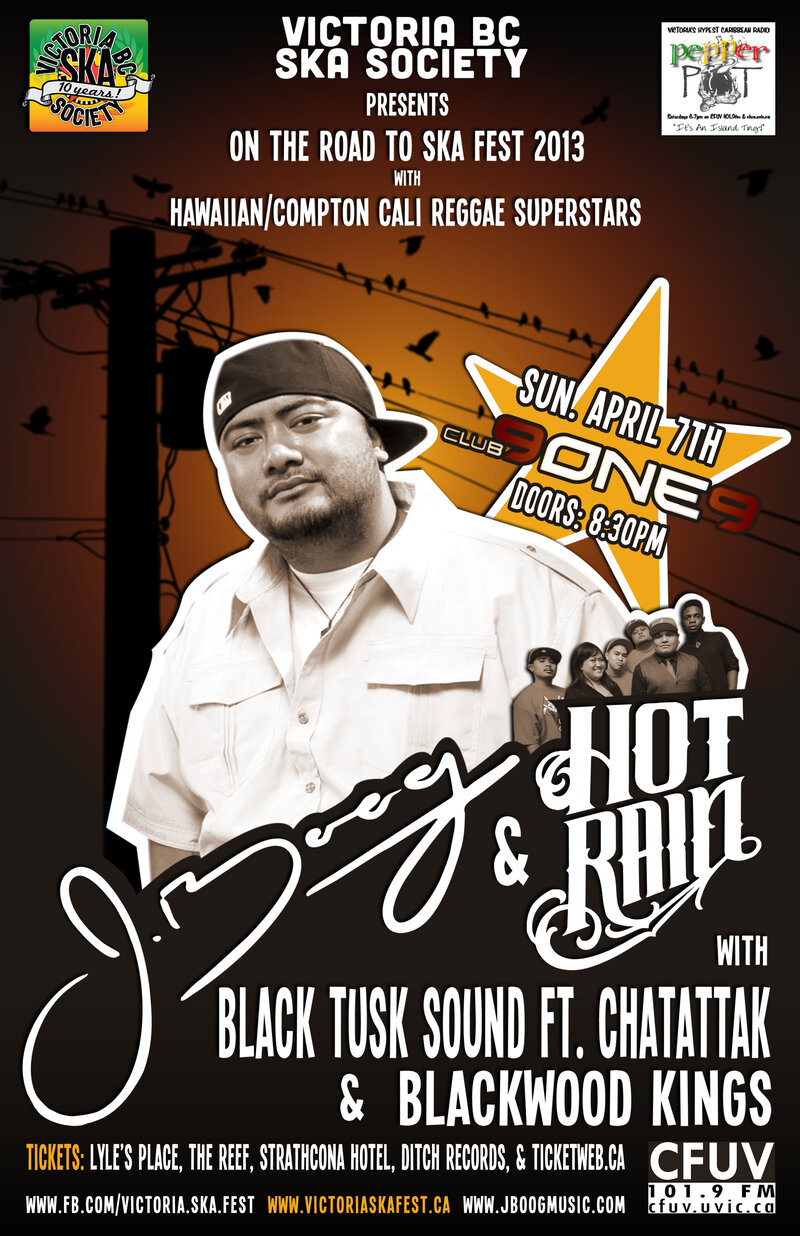 If you haven't heard of J BOOG you're in for a big (nice) surprise. His band's rhythm section is solid and the vocal harmonies are some of the best in North America. They remind you of roots reggae bands like Culture or The Itals or Israel Vibration. But through his close connections with Gramps Morgan and the Morgan Heritage Family whom he recorded with at Tuff Gong Records in Jamaica, the music is contemporary and high energy at the same time.

J BOOG's collaborations with performers such as Taurus Riley, Richie Spice and the Morgan Heritage Family have catapulted his name to the top of reggae and dancehall circles all over the world.

And other guests of honour on this show include: BLACK TUSK SOUND ft. CHATATTAK & BLACKWOOD KINGS... Read on!

From the mountainsides of eastern WA to the sandy beaches of Jamaica (and many places in between), Reggae music ambassador MISTA CHATMAN remains livicated to entertaining the masses with his booming, ragga styled mic chatting. And for the past few years he has performed in many festivals, shows and reggae parties in places like BC, NYC, SF and JA, both solo and alongside artists such as Delhi2Dublin, Kytami, Subatomic Sound System, Jahdan Blakkamoore, Non Stop Bhangra, and others. He has also shared the stage with many reggae greats such as Collie Buddz, Mad Professor, Barrington Levy, Marlon Asher, and Yellowman. While his live appearances have been his main vehicle for spreading his musical message over the past few years, he also has begun to focus on more recording projects and has collaborated with the likes of Canada's Delhi2Dublin, Kytami, SF dubstep producer El Diablo, Brooklyn-based glitch producer Rx, Slit Jockey Record's El Carnicero, Jamaican artist God Head, BC-based producer The Phonograff, and Vienna's Electro Dance outfit The Kung Fu Divas. He has also begun work on a forthcoming Dancehall Pop EP coming in 2013 with the first single "Mash it Up Again" released in February. And recently, he has started working longside the Black Tusk Sound in which he goes by the name of CHATATTAK.

Black Tusk Sound is Whistler's first original “dubplate” sound owned and operated by DJ Scovie. DJ Scovie grew up in Toronto and very quickly became a huge fan of reggae music. Influenced mainly by Bob Marley and the early dancehall style of the 90‘s. During this time he was exposed to the competitive style of “Sound Clashing”, influences such as Stone Love, David Rodigan, Killamanjaro, King Turbo, and many others. After moving to BC in 1999 he soon acted on his passion and started DJ’ing the local circuit. DJ Scovie has played throughout the West Coast: Pemberton, BC to Berkeley, CA and holds a weekly residence: “Sound System Wednesday” in Whistler BC. DJ Scovie was selected for the opening of Ky-Mani Marley’s World Tour, Gramps Morgan’s B-Day Bash, Jr. Reid & The One Blood Band’s Tour, Burning Spear, and notably Damian “Jr. Gong” Marley’s Whistler’s 2010 Olympic Jam. DJ Scovie was the Official DJ of the 2010 Jamaican Olympic Bobsleigh Team.

DJ Scovie has been producing and engineering custom made songs known as "dubplates" from some of the world's top reggae artists. DJ Scovie has worked and played with Grammy Award Winning Artists: Beenie Man, Bounty Killer, Bunny Wailer, Burning Spear, Luciano, Capleton and many more. The sound system scene is generally regarded as an important part of the reggae music industry. Black Tusk Sound has been producing singles since 2001 and has built a very unique and original "Sound" representing Whistler, Pemberton, and all of British Columbia, Canada.

Just over a year into their evolution, they're one of the more unique bands to pop up in the Victoria scene. Building upon a foundation of Jamaican genres such as ska, reggae, and dub, Blackwood Kings also incorporate influences from styles as diverse as punk, progressive rock, funk, hip-hop, and metal. Named after the street corner where the band rehearses, this is a group ready to make some waves. Ska Society fans may remember them from their last appearance at Swan's Nightclub with Vancouver's Giraffe Aftermath and Paapa Wastik from Ghana.