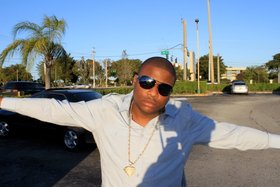 GAPPY RANKS breaks new ground with his wicked party dancehall while often using riddims from the ol school in the mix. Gappy Ranks has become one of the best up and coming dancehall reggae artists in the UK and North American scenes. He has appeared and is scheduled to perform at various major festivals throughout the world including Summer Jam In Germany, Glastonbury Music Festival and Sierra World Music Festival In California.

Gappy Ranks has also Wore the hat as producer on a number of projects though his independent record label Hot Coffee Music & has produced for recording artists such as Gyptian (whom he has a hit single with), Chino, Busy Signal, Delly Ranx, Bugle, Khago, Bramma, Laden, Bobby Hustle, JBoog, Chucky Star, & many more including Reddman Uk who Gappy Ranks signed To his Hot Coffee Music Label In 2011.

The classic definition of the term MC is one that has the ability to grip a mic and control the crowd, and Kyprios has more than earned this title. He is a commanding presence on stage – able to hold the crowd in silent rapture as he drops an introspective piece that draws heavily from spoken word, only to suddenly flip it and incite a sea of thrusting hands with a rapid fire set of punchline-laden lyrical flows. Able to deliver a seamless blend of rapping, singing and harmonizing, the North Vancouver, BC native’s larynx is a potent stash of varied lyrical weapons.

Bobby Hustle expresses this balance through reggae music in a style all his own. Exposed to a diverse range of music during his childhood, Bobby was taking saxophone lessons in primary school and it wasn’t long before he picked up a guitar and began emulating his favorite singers. With polished lyrics and a natural sense for melody, Bobby delivers the perspective of a young hustler, constantly on the move yet still enjoying every moment on his way to success. Already having toured the states with Konshens, Protoje and Gappy Ranks respectively, Bobby’s music is taking the streets, clubs and radio waves by storm. Reaching charts worldwide with tunes like “Weed Like Mine” and “Seventh Time Rise”, Bobby is moving forward and climbing the ranks of the industry.

Tank Gyal has become known as the "top shotta" of the dancehall scene in Vancouver. She's held down the most successful consistently running dancehall night called "Ting" at the Astoria for many years. Not a stranger to Victoria Tank Gyal will keep things warm in between sets for Gappy Ranks, Bobby Hustle, Kyprios and Blessed Coast Sound!

Hip Hop/Funk from Vancouver BC

Dancehall/reggae/hip hop from Vancouver BC