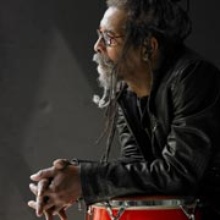 Fri. July 12th 2013 @ Long & McQuade Music Education Centre Victoria BC (All Ages)
3.30pm - 4.30pm doors at 3.30pm
Free
Presented by: Victoria BC Ska and Reggae Society, Victoria Ska & Reggae Festival
One of the greatest congueros Jamaica has ever produced, Larry Mcdonald is a rhythmic icon in the ska world. In a career that stretches back to the early ’60s, he has worked alongside some of the greatest ska and reggae artists of all time including Bob Marley, Peter Tosh, Lee “Scratch” Perry, The Skatalites, and Gil-Scott Heron. Larry recently released his first solo effort, drumquestra, at the age of 73. Victoria Ska Society is blessed to have Larry Mcdonald grace our stage alongside David Hillyard and the Rocksteady Seven.

The workshop ‘Rhythmic Patterns and Improvisations in Ska’ will include a reflection on McDonald’s long and distinguished career, plenty of musical demonstrations and a focus on the many rhythms that can accent and distinguish a traditional ska or reggae beat including the Nyabinghi. This workshop is a must for drummers and percussionists or anyone with a keen interest in rhythmic patterns. The interactive portion of the workshop will include a chance for die hard music fans
to converse with a legend.