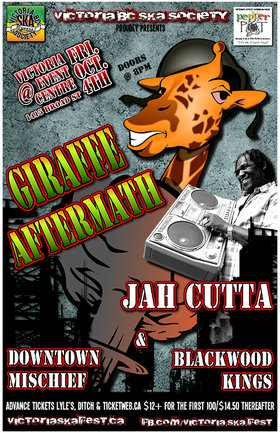 Fri. October 4th 2013 @ Victoria Event Centre Victoria BC (No Minors)
9:45pm - 2am doors at 9pm
$12+ for the first 100/$14.50 thereafter
Tickets at: Lyles Place, Ditch Records & Cds, Ticketweb
Presented by: Victoria BC Ska and Reggae Society
Giraffe Aftermath is on the verge of more incredible music to give thousands of people throughout the West Coast who continue to discover just how talented and entertaining this big five piece out of Vancouver is.

Fresh off their spring California tour and another unforgettable Ska Fest performance Giraffe Aftermath returns to Victoria with all their old favourites and a few sneak peak songs from the album they are currently working on right now. Get ready for relax reggae dub bass melodies with sweet harmonies and horn lines and solos that will keep you thirsting for more!

Jah Cutta is an artist who believes that music should serve a purpose – “I was ordained to sing music to uplift people and bring joy into their lives.”
Over the past 37 years he has toured the Caribbean, Canada and the United States. He has shared the stage with performers including Peter Tosh, Beres Hammond, The Wailers, Ken Boothe, Luciano and Sugar Minott. His performances include Rebel Salute in Jamaica, the Montreal and Calgary Jazz Festivals, the Festival of Lights in Montreal and numerous reggae festivals across Canada including Montreal, Saskatoon, Calgary and the Victoria Ska Festival.

His goals are to reach out to those in the poorest nations and to bring a smile to the children’s faces – to provide hope to those who have none and to show that there is a brighter future when people work together to solve a world problems such as hunger and violence.

Just over a year into their evolution, Blackwood Kings is one of the more unique bands to pop up in the Victoria scene. Building upon a foundation of Jamaican genres such as ska, reggae, and dub, Blackwood Kings also incorporate influences from styles as diverse as punk, progressive rock, funk, hip-hop, and metal. Named after the Victoria BC street corner where the band rehearses, this is a group ready to make some waves. Laid-back reggae rhythms, odd time signatures, dueling guitar solos, slap bass lines, frantic jungle beats-- no musical idea is off limits, making live performances varied and energetic.

After sharing the stage with stalwarts of the local scene such as Mindil Beach Markets and Everybody Left, Blackwood Kings is now splitting bills with out-of-town musicians such as Vancouver's Giraffe Aftermath, Ghana's Paapa Wastik, Canada's reggae legend - Jah Cutta (for this show) and Hawaii/Compton's reggae superstar J-Boog.