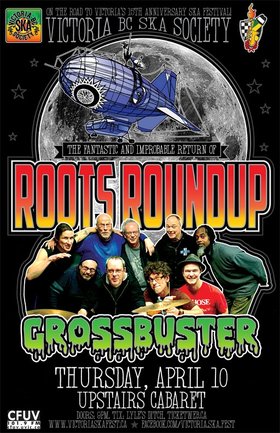 Thu. April 10th 2014 @ The Upstairs Cabaret Victoria BC (No Minors)
9:30pm doors at 9pm
$14.50+ adv.
Tickets at: Lyles Place, Ditch Records & Cds, Ticketweb
Presented by: Victoria BC Ska and Reggae Society
You all know how much Victoria BC Ska Society loves presenting reunion shows. So we wanted to ask those that used to be active in the all ages ska/reggae/punk scene in the late 80s and 90s if you've ever heard of the band Roots Roundup? If you used to go to Pressure Cooker or Cultivator shows you'll know what we're talking about. Regardless if you don't know you will be able to learn now as they'll be part of our On the Road to Ska Fest festivities in April 2014.

Originally formed in 1985 in a small apartment in East Vancouver, Roots Roundup became widely known through the late 80′s and early 90′s as one of Canada’s hardest working, hardest touring and hardest rockin’ worldbeat dance bands. They released numerous independent recordings including “Get Rooted”, “What We Do”, “Syzygy” and in 1997, “Rootrospective”, a 16 song collection spanning their entire recording career.

Instrumental Beats from Victoria BC
© 2023 Victoria BC Ska & Reggae Society