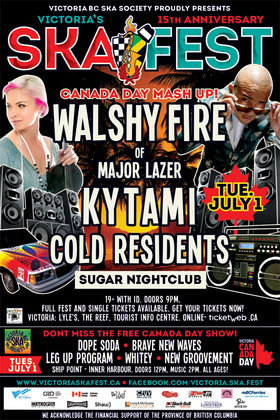 On line tickets on sale now. Click the link below to purchase: http://tktwb.tw/1rSsAym

Walshy Fire - the king of Miami dancehall juggling duties as the DJ and hype man for Diplo’s genre-bending dancehall carnival, Major Lazer and one of Jamaica's more revered sound systems Black Chiney. He lays down the dancehall influence hard into Major Lazer and keeps the high reputation Black Chiney has built around the Caribbean and the rest of the world.

Whether hyping up a crowd of discerning reggae enthusiasts with expert selections or introducing European festival crowds to the meaning of “Pon De Floor”, WALSHY FIRE has truly earned the title of Global Ambassador of Music & Culture.

Kytami is no stranger to Victoria BC Ska Society and the Victoria Ska Festival as she has made appearances on shows with Rocky Mountain Rebel Music (now defunct), Tanya Stephens and other groups. She was also the co-founder and a critical member of Vancouver's Delhi to Dublin up to 2010. Now Kytami's solo career is blossoming as audiences can see how talented and versitile she is. It's hard for someone from any genre not to like what she creates whether she is mixing classical music with hip hop, drum n' bass, dancehall or dubstep there is something for everyone at Kytami's performances.

Cold Residents was founded by Reflectionz and Aleph 1ne in early 2012. The brand was originally created as a foundation for the duo, releasing songs for mix tapes such as “The All Love Album” and “Pacific Pressure mix tape,” as well as dropping their first single, “Opening Doors.” They have since expanded their roster to include the creative expertise of such artists as Ishkan, and Ashleigh Eymann each with their own established presence in the west coast Hip-hop scene, and each the master of their own respective style. They have come together to expand on what they can do as individuals, and agree that the phrase, “5TRENGTH 1N NUMB3RS,” is probably not just cliché or taboo.