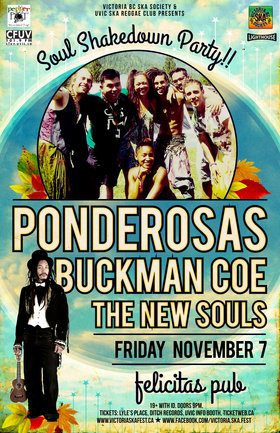 Fri. November 7th 2014 @ Felicita's Pub Victoria BC (No Minors)
9:30pm - 1am doors at 9pm
$13 regular adv./$11 for students
Tickets at: Lyles Place, Ticketweb, Ditch Records & Cds, UVIC Information Boothe (Student Union Building)
Presented by: Victoria BC Ska and Reggae Society, UVIC Ska/Reggae Club
Victoria BC Ska Society and UVIC Ska/Reggae Club is proud to present Soul Shakedown 2014 featuring The Ponderosas, Buckman Coe and The New Souls. The Ponderosas will be giving us some sneak peaks from their upcoming album that will be released just before Christmas of this year. Buckman Coe also has a brand new album that is set for release in October 2014 called "Precession" The band will be playing songs off it at the show. Precession was produced by Adham Shaikh and features some heavy hitters in the Vancouver music scene including Michael Fraser, Tom Van Deursen (Boom Booms), Kristie McCracken, and Martin Reisle.

Finally the bill will be rounded out with The New Souls who have played at both Victoria Jazz Festival and Garden City Grooves two years running.

The Ponderosas take soul, r&b,reggae, and blend together in a musical blender until they’ve got everyone in the crowd moving and grooving to their festive and lively rhythms. this Vancouver eight-piece have worked with groups such as Natural Flavas, The Boom Booms, and Rude City Riot. Their infectious music is sure to start a dance party througho... more info
Videos:

Buckman Coe is one of the most interesting and captivating artists in Western Canada right now. London born and Edmonton raised, Coe has made his name with crafted, folksy reggae songs about love, life and the path of enlightenment. His journeys have led him to a degree in economics and geography, as well as studying psychology at Naropa University... more info
Videos:

The New Souls are a six-piece soul/R&B band. All of them lovers of soul music, a union was created to express soul music in a way that feels soulful to them, a way to incorporate broader musical influences into a genre that is based on feeling the music, and more specifically, the groove. The band is getting ready release it's first EP for spring... more info
Playlists