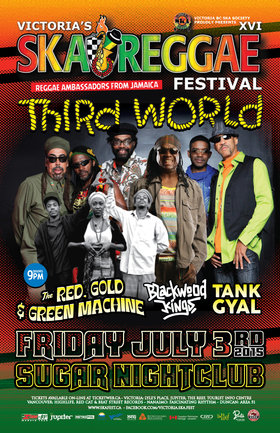 With 10 grammy nominations, performances on six continents, and four decades of hits, Third World have earned the title of “Reggae Ambassadors”. Born as a roots reggae group in the early 70s, Third World have made a name for themselves by constantly defying conventions and expectations. Despite many of their contemporaries sticking to their guns, Third World always evolved, bringing in elements of funk, disco, R&B, soul, hip-hop, and dancehall as the years progressed. The band has proven itself to be open to experimentation as well, incorporating instrumentation such as classical strings not normally associated with the reggae genre. Bass player Richard Daley describes the band’s philosophy succinctly: “We [take] roots reggae music and put branches on top of it.” While original lead singer Bunny Rugs passed away last year, the sextet is still going strong with original members Daley and guitarist/cellist Stephen “Cat” Coore leading the way. Their performance Friday night is sure to be one that reggae fans both young and old will never forget.

To label The Red, Gold and Green Machine as simply “soul”, “reggae”, or “hip-hop” would be a disservice to their vision. Formed in 2010 after a fateful meeting at British Columbia’s Shambhala Festival, the group is anchored by the union of L.A. emcee Dr. Oop (of the bLAckloveR88rs) and Vancouver-based soul vocalist Tonye “Magic T” Aganaba. The group also features unofficial third member, MC Nucleus. The Machine does not focus on fitting a particular genre, but on crafting smooth, lively tunes laden with crisp harmonies and emotive lyricism. That said, it’s clear that reggae has influenced every inch of the group’s music. From the Rasta-nodding band name to the grooves and beats that seem straight out of Kingston, it’s clear that the Machine’s music comes from a place of understanding of love for the scenes it gleefully blends together.

Now three years into their evolution, Blackwood Kings has proven to be one of the more unique bands to pop up in the Victoria scene. The band’s oddball approach to reggae and dub brings in unorthodox musical ideas not normally found in the genre such as interlocked guitar leads and irregular time signatures. Blackwood Kings' diverse and malleable sound has allowed the group to share the stage with notable acts such as Sierra Leone's Refugee All-Stars, iconic ska-punks Authority Zero, and Polynesian reggae superstar J-Boog. Things are just getting started for this young, progressive dub quintet.