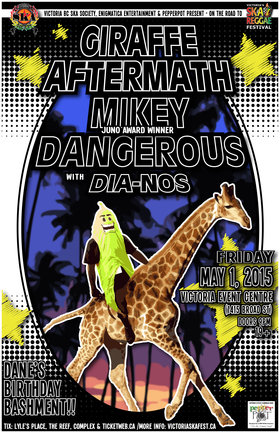 Fri. May 1st 2015 @ Victoria Event Centre Victoria BC (No Minors)
10pm - 1:30am doors at 9pm
$12 - $14.50 adv.
Tickets at: Lyles Place, Ticketweb, The Reef, Complex
Presented by: Victoria BC Ska and Reggae Society, PEPPERPOT
It's a bit last minute but we think we can squeeze in another wicked and wild reggae show before Victoria's 16th Annual Ska & Reggae Festival.

And it just so happens that it's Dane's Birthday so we thought it would be nice to kill two crows with one stone ;)

Tickets go on sale on-line on Monday, April 13th on ticketweb.ca. They'll be on sale shortly after at Lyle's Place, The Reef, and Complex. $12 - $14.50 adv. Price will rise as tickets sell.

Mikey Dangerous captivates audiences with his powerful voice and energetic performances. He is a hidden gem in the dancehall/conscious reggae world in Canada. Mikey Dangerous has played alongside many of the who's who of reggae throughout the world. Within Canada he just finished headlining the Saskatoon Reggae Festival and he has also played at th... more info
Videos:

other sites: fb
Dia-Nos consists of two Musicians, one Dia the other Nostic. Dia-Nos use ancient sayings, symbols, and instruments, combined with a modern sound in there music. Dia & Nostic produce their beats as a team. Live; Dia vibrantly djs through a Kaoss Pad while Nostic spits over it in a multitude of languages including: English, Spanish, Latin & Greek. Th... more info
Playlists